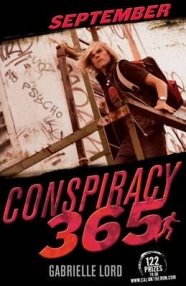 On New Year’s Eve, Cal is chased down the street by a staggering, sick man with a deadly warning…”They killed your father. They’ll kill you. You must survive the next 365 days. Hurled into a life on the run the 15-year-old fugitive is isolated and alone.

Final Thoughts:
These books are so short, so I thought I’d leave the reviewing until I got through a chunk of them. I’ve just read June through September over the past week, diving into them, hoping for some new discoveries, understanding the clues that have been dropped so far, and finally getting some closure. Being the middle of the series, we didn’t get too much of that. Instead, these books sought to develop the friendship between Cal, Boges and the mysterious girl, Winter. There are trust issues brought into it, and lots of betrayals that definitely warranted that scepticism. Reading them back to back like this, it’s easy to see how formulaic these books are. Each one begins with a quick resolution of whatever cliffhanger had proceeded it, leaving Callum scrambling to pull things back together, then another month of running around, looking for clues, leading up to another catastrophe that just happens to fall on the final day of each month.

There has been some progression to the mystery, but there are just as many new things being introduced, just to make sure the reader doesn’t get too comfortable. The plot surrounding Cal’s twin has been dragging on for way too long in my opinion—barely resolving anything in that regard. We do get somewhere, but not nearly enough. Old characters from the start of the series start popping up again too, ones that may have seemed inconsequential before. I like when that happens, tying things together. I’m trying to piece it together, but haven’t come up with much so far.

What annoys me the most, is the portrayals of the adults in this series. It is as if the kids have more brains than them sometimes. The adults are very one dimensional—unable to process in-depth thought. I guess that’s the aim, but it’s frustrating when reading. It’s making me read faster so I can get to the end, when everything finally gets revealed, and have everyone realise how stupid they were.

There is a lot of action, with lots of near death situations for this sixteen year old. It will be fun to watch the tv series once I’ve finished the books and see how they compare. From flying aeroplanes, to getting trapped in all sorts of tight spaces, boulders almost crushing him, it’s a wonder he hasn’t croaked yet. I’m not too worried though—these types of books don’t usually kill of their main characters. It when the side characters are in danger that it becomes more gripping.

On the romance front, there’s barely anything on page—but there is an undercurrent. I feel like things are going to bubble over eventually between Cal/Boges/Winter. One of them is going to get left out in the cold. I can’t wait to see if anything comes from that.

Recommended to:
Teen boys are the obviously demographic for these, but there’s nothing to stop anyone else from enjoying these quick reads, teen or otherwise.