Apr
28
REVIEW: “The Fault In Our Stars,” John Green
Posted in "Book Reviews" • One Comment 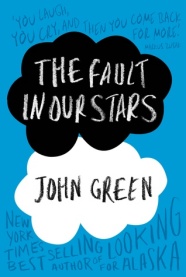 Diagnosed with Stage IV thyroid cancer at 12, Hazel was prepared to die until, at 14, a medical miracle shrunk the tumours in her lungs… for now.

Two years post-miracle, sixteen-year-old Hazel is post-everything else, too; post-high school, post-friends and post-normalcy. And even though she could live for a long time (whatever that means), Hazel lives tethered to an oxygen tank, the tumours tenuously kept at bay with a constant chemical assault.

Enter Augustus Waters. A match made at cancer kid support group, Augustus is gorgeous, in remission, and shockingly to her, interested in Hazel. Being with Augustus is both an unexpected destination and a long-needed journey, pushing Hazel to re-examine how sickness and health, life and death, will define her and the legacy that everyone leaves behind.

Final Thoughts:
Oh my…this was the book I needed to read. I’ve been in a slump lately, taking a while to read books that were okay, but that really didn’t do a whole lot for me. The Fault In Our Stars draws you out of whatever little crook you’ve been hiding in and shoves you head first into a world of feeling. I got this one a couple months back, but I’ve been avoiding picking it up mainly because I’d just read another amazing book that dealt with teen cancer and needed the break to prepare myself. On a whim, I snatched this one off my shelf and took it with me to pass the time in a waiting room and ended up almost finishing the book. Albeit the wait was 4+ hours, but it flew by. I was engrossed. I had to eventually stop myself and put it away—the tears were struggling against my flickering eyelids. Sure I could have continued struggling against a break down in public, pausing every now and again—but I wanted to give this book the attention—and the release—it deserved, so I waited, and dove back in as soon as I got home and utterly adored every second of it.

Hazel’s narrative brings such a realism to the universe these characters live in—it was easy to forget it was just a book and slip right in there with her. It doesn’t come across as depressing—full of sarcasm, flirting, bonding, self-deprecating humour, running jokes, and romance—lots of romance. It doesn’t try and paint a rosy hue over the cancer though—it’s there, right there, making its presence known, but what makes it great is that these characters—these people—they are more than the disease, they full of an incalculable energy that just makes you want to be around them. Within the first few pages, I knew I should have started this book sooner. Starting at Support Group and quickly taking off into Hazel Grace/Augustus show, I felt exactly like Hazel—not wanting to hang up and leave that special third place.

Augustus was the hot—and smart—guy, with the prosthetic leg. But he was also the one with an affliction for making Hazel happy, staring at her because he liked staring at beautiful people—why else? I liked that he wasn’t there to frustrate her to the point that she fell in love with him, but that an actual series of positive, fun and flirty events brought them closer. The subplot involving a book within the book was interesting, adding layers to the dynamic between the two and really ties things back into one another. As for the parental side of things, some of the most moving lines came from their lips—creating moments that are perfect in breaking you. I made time to stop, and reread the lines once my eyes cleared, only for them to tear up again.

It is a sad book.

But it’s also a wonderfully uplifting book. I do admit I had to leave a day before I began working on this because I need that time to gather myself, but it wasn’t because I’d been left splattered all over the tiles in a coalescing pile of salty goo. I did break down—but it picked me back up again and gave me tears of joy—joy that I’d read The Fault In Our Stars.

Recommended to:
Those that could stomach my gushing review. Set aside a day, switch off your technology and get lost in Hazel and Augustus’s little infinity.

I don’t normally do this—and there are so many things that I could quote—but a couple lines that I really found myself agreeing with were:

“You know how I know you’re a fighter? You called a ten a nine.”
But that wasn’t quite right. I called it a nine because I was saving my ten.