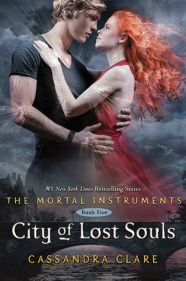 The demon Lilith has been destroyed and Jace has been freed from her captivity. But when the Shadowhunters arrive to rescue him, they find only blood and broken glass. Not only is the boy Clary loves missing–but so is the boy she hates, Sebastian, the son of her father Valentine: a son determined to succeed where their father failed, and bring the Shadowhunters to their knees.

No magic the Clave can summon can locate either boy, but Jace cannot stay away—not from Clary. When they meet again Clary discovers the horror Lilith’s dying magic has wrought—Jace is no longer the boy she loved. He and Sebastian are now bound to each other, and Jace has become what he most feared: a true servant of Valentine’s evil. The Clave is determined to destroy Sebastian, but there is no way to harm one boy without destroying the other. Will the Shadowhunters hesitate to kill one of their own?

Final Thoughts:
This book just went on and on. Don’t get me wrong—it was definitely a solid four stars, but it did have me constantly checking if I was getting any closer to the end. I think a nice, thin book is in order to cleanse the palette after the ten plus hours I spent lying on the couch today, clutching my hardcover of City Of Lost Souls. I found improvements in this instalment over the previous incarnate, the second half of the series finally forming a distinctive plot with some actual tension. However, I found the overuse of alternating point of views detracted from my enjoyment. With over ten different perspectives, they seemed to be used more to create suspense by jarring us out of situations just as they were getting interesting, rather than to give extra insight into these other characters.

Firstly, I need to mention that Clary is still the main focus. Even though virtually the rest of the cast gets go at the mental microphone, Clary—and her time spent trying to save Jace from himself form the forefront of the book. Somewhere, midway through, the switching levels out and we actually get some continuity with the headspace. I wasn’t opposed to seeing what the other characters were up to when Clary wasn’t around, but if we’d stuck with say, Simon, there would have been a greater chance of forming the bonds that make you care about the characters.

For instance, the Maia/Jordan plot, felt so out of place compared to the rest of the book—like they were just squeezed in for the sake of it. And the fact that it rushed up, out of nowhere—their relationship just fell flat for me. I was much more interested in the likes of Alec/Magnus and Simon/Isabelle. Their scenes were focussed on the secondary plot, while also allowing the four of them to grow around each other, their pairings facing their own struggles that were drawn out over the course of the book.

After the cliffhanger of City Of Fallen Angels, I’d been pumped up, expecting a full out hell-spawn Jace, so when Jace finally came on the scene, the book really picked up for me. The first hundred pages were a bit so-so without him, but they did serve their purpose in bringing together Clary and her friends. I found myself liking the disturbingly apathetic version of Jace, and occasionally, even his co-conspirator, Sebastian. Clary’s brother was a hard character to pin down. But hanging out with the bad guys, and actually starting to find something likeable in them made it that much more enjoyable to read than just sitting on the outside, worrying about their nefarious plans from afar.

Coming to the end, I have to say that reading this book reminded a lot of why I like the genre. The action she writes always has a sense of grandeur to it. The characters face real peril. They have to make tough, self-sacrificing decisions. Characters are never safe—no one is. There are no easy outs. Every trial comes with a twist—something that screws up their plans. Happy endings aren’t guaranteed—and I love that. I love the pain, because that makes it that much more real.

Recommended to:
Those after a series full of romance, evil, action, and plenty of snark.