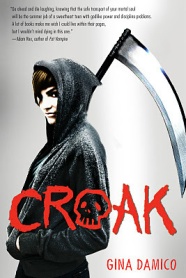 Sixteen-year-old Lex Bartleby has sucker-punched her last classmate. Fed up with her punkish, wild behavior, her parents ship her off to upstate New York to live with her Uncle Mort for the summer, hoping that a few months of dirty farm work will whip her back into shape. But Uncle Mort’s true occupation is much dirtier than that of shoveling manure.

He’s a Grim Reaper. And he’s going to teach her the family business.

Final Thoughts:
This one ended up being surprisingly addictive. It wasn’t quite what I was expecting—something along the lines of a Dead Like Me clone—still, it turned out to be a little gem, just in a different way. Lex quickly progressed from her initial delinquent state featuring quite a lot of physical violence and a general defiance of reason into someone that seemed somewhat pliable. I enjoyed her antics in the beginning, but found it a relief that the book didn’t rely on her punching people for 300 pages. It goes off on a mystery solving tangent instead, backed by a town full of death and reaping, laced with plenty of humour, teen bonding—the occasion bout of underage drinking—and a mashup of board games.

Going through the required culture shock, Croak takes a while to get into things, but in the meantime, it still kept up the pace with the introduction of Uncle Mort—a guy presumably in his thirties, tatted, and basically nothing like the backwards farmer Lex had been expecting to spend her summer with. I felt like there wasn’t enough of Mort, at least once the other characters were brought in. He didn’t disappear completely, but took on an ancillary role the deeper I got. He really was fun in his taking-no-nonsense—but-full-of-nonsense-himself kind of way. Full of life, he was the perfect onslaught for the book. Scaring Lex half to death and constantly stonewalling her, I found him a hoot the more he frustrated her.

I enjoyed the romantic aspect of the book for the fact that it wasn’t romantic. It was a collision course of chemistry, both Lex and Driggs pissing each other off more frequently than breathing. Still, it was one of those coupling where it’s clear that they work well together. They aren’t the same, but they seem to get each other in a wry, inside joke manner. Damico occasionally acknowledges how hot or desirable people find Driggs, but she doesn’t have him play up on it. Don’t get me wrong, I love a good walking ego, but it’s refreshing when you come across a genuine, self-deprecating personality—someone with feelings. I wasn’t taken by everything about Driggs—there were some iffy parts—but on the whole, I liked his character.

There were too many teens to remember, at least in my opinion. We were briefly introduced to everyone early on, and from then, I just got lost on keeping up with who was who. The main couple, they had plenty of repeat references, but for most of them, I just found myself reading with the idea that these people were ‘Lex’s friends’. They were fun, but I didn’t have any kind of real attachments to them. They did help boost along some scenes, like the Afterlife full of dead presidents, there to greet the recently departed. When you factor in the paranormal aspects, it really was really rather cool, what with the miniature scythes, travelling through dimensions, and the creepy little backwards town itself. I loved that the twists still got me, even though I’d picked up on a few of the clues along the way. With an ending that satisfied me, I’d be happy for it to end here, but there is definitely potential for more in this quirky series.

Recommended to:
Those interested in snarky girls, and the boys that annoy them.