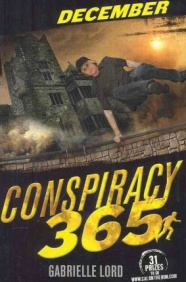 On New Year’s Eve, Callum Ormond is chased down the street by a crazed man with a deadly warning: They killed your father. They’ll kill you. You must survive the next 365 days! Cal has one month to go, but the secrets are mounting higher and time is not on his side. The answers lie hidden thousands of miles away, but with friends and family at his side, Cal’s determined to reveal the truth or die trying …

Final Thoughts:
I finally made it to the end of this twelve-book series. There’s still Revenge, the epilogue book, but as for the main plotline of the series, everything has been pretty much wrapped up. Being so short, I whipped my way through these last three instalments at the same time, hence the lack of a review for the previous two months. October had some cool spy tricks as they attempted a bank heist, and also gave us some more info on Winter’s story, but again, didn’t move the plot a whole lot for Callum. November was just as bad at progressing things—the only thing memorable in that book was the revelation behind Callum’s double—and again, that wasn’t much of a shocker. December made up for its predecessors’ shortcomings, packing the gang up and sending them off towards a twist-riddled, action-full finale.

It wasn’t exactly the most believable of situations. There were moments when I thought that the characters wouldn’t have changed their positions so easily, that they would have needed more of a persuasion. It is crazy how many times Callum manages to almost die/get captured yet has a miracle rescuer or escape hatch pop into sight at the last moment. It’s there for tension, but after a while, you just stop worrying, because you know he has to somehow make it out, all three of the main characters do—it really lowers my opinion of the series in comparison to say, another similar middle grade series, Escape From Furnace, which constantly kills of characters, disfigures/dismembers them.

The romantic sideplot didn’t really eventuate into anything behind a kiss on the cheek, if even that. I’d expected something along the lines of a love triangle, but again, that didn’t hold up. Maybe Revenge will go into that. Winter’s plot was full of mystery for a greater part of the series, her loyalties being brought into question more than once. I don’t think she got enough of a resolution, or closure—there were answers, but if I were her, I’d feel gipped. Callum’s double was one of the storylines I liked more in the beginnings of the series. It was frustrating, but fun at the same time, having it left a mystery. When we found out what was going on, and the turnaround on Ryan’s part, I thought the characters acted in an unrealistic manner—they were just too accepting. I would have liked some outbursts. Even so, I did like what it added in the way of assisting their mission.

As for the actual Ormand mystery—I thought it could have been something more. The actual reveal wasn’t too exciting. Sure, it made sense, but I would have liked something more complex. I did like the twists that were thrown at us. I didn’t pick up on them. So, in that regard, I did enjoy December. It’s just the lack of believability that took it down a notch for me.

Recommended to:
Those after a quick read full of near misses, and mystery.