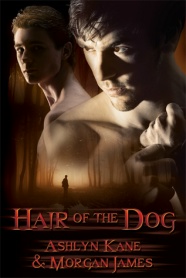 It’s nine o’clock the morning after his father’s funeral, and Ezra Jones already knows it’s going to be a bad day. He wakes up hungover, sore, and covered in blood. Then it gets worse: the handsome and compelling Callum Dawson shows up on his doorstep claiming Ezra’s been turned into a werewolf. Ezra wants to be skeptical, but the evidence is hard to ignore.

Ezra doesn’t have a lot of time to get used to the rules Alpha Callum imposes—or the way his body responds to Callum’s dominance—as he’s busily working for the CDC to help uncover the origins of a lycan epidemic. When the sexual tension finally breaks, Ezra barely has time to enjoy it, because a new danger threatens. Someone wants Ezra for their own unscrupulous purposes and will do anything to get him.

Final Thoughts:
I raced through this one, picking it up whenever I had a spare ten or fifteen minutes—I just really got into it. It’s been a while since I’ve read a predominantly werewolf-focussed book, so that could have been part of it too. Being co-authored, I expected glaringly obvious breaks whenever the point of views shifted, but thankfully, the writing flowed together seamlessly. I did have a problem with the ease by which Ezra came to accept everything lycan. It was the sort of thing that took you out of the story, because any sane person would have been far more sceptical. Beyond a gash, there was no proof, at least nothing that the human mind wouldn’t have been able to come up with an alternate explanation for. Aside from that (and a few other things), I found the book enjoyable, and relatively easy to get into—it fits well as a solid 3-star read.

The idea of having alphas and betas isn’t anything new, but this one seemed to take that aspect and really ramp it into the forefront. Giving orders took on a new meaning—free will played no part—the beta’s body would react automatically to whatever the alpha wanted. But the ones being ordered around didn’t totally luck—instant boners were the reward. It was clearly heading towards a dom/sub relationship, but eventually, it pulled back a bit the further we got into the plot. With the pheromone-induced “boners”—yes, this word was used relentlessly—filtering out in what seemed like a way to build trust, and the added annoyed of a plot-specified cock blocking, it brought things to a stalemate for a while. If you were told ‘no sex before the full moon’, you’d be crossing those damn days off the calendar.

I can say that this one gained points for taking its time, and avoided the trappings of instaluv. As much as it frustrated me, having characters ‘find true love’ by page five annoys me even more. Seeing it from alternating points of view, it’s obvious both characters are lusting after each other, but that’s a different story—that I can deal with. Their horny antics were fun, and definitely boiled over, but they weren’t especially prominent in comparison to the plot. The sex could have used a more something, but it was by no means a disappointment. I rolled my eyes at the final sex scene, but that played more into the timing, location and general situation, than anything else.

In terms of the action, the mystery, I felt there could have been a stronger backbone holding it together. We were given snippets of the bad guys throughout the book, keeping us aware of the danger, but it took way too long to come to fruition, and was resolved rather quickly. Though, considering I didn’t go into this for the bigoted antics of the crazed werewolf and his scientist, I still quite enjoyed my time with this one. Ezra and Callum were fun to be around, and so were the rest of the pack.

Recommended to:
Those after a romance full of sexual tension and biting.