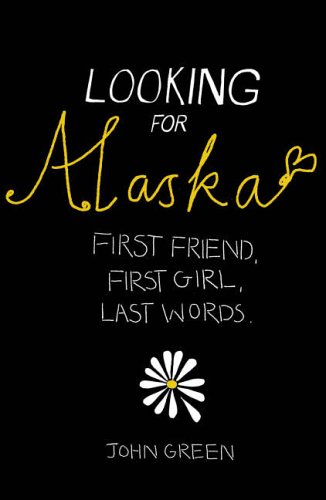 Miles Halter is fascinated by famous last words and tired of his safe life at home. He leaves for boarding school to seek what the dying poet Francois Rabelais called the “Great Perhaps.” Much awaits Miles at Culver Creek, including Alaska Young. Clever, funny, screwed-up, and dead sexy, Alaska will pull Miles into her labyrinth and catapult him into the Great Perhaps.

Final Thoughts:
How does one review a John Green book? Seriously, what kind of addictively illicit substance is he sprinkling the pages with? After being randomly sent a copy of The Fault In Our Stars and finding myself obsessively pawing through it in a matter of hours, I went off to my library and tracked down his debut. It didn’t disappoint. He just has a way with characterization—they don’t feel like characters—they are real. Staring through Miles/Pudge’s eyes, I found similarities in myself—lots of them, actually—and immediately connected with the book. The ploy used throughout the formatting of the chapters made the twist fairly obvious, taking away most of the impact, but in spite of that, I still enjoyed it greatly. If anything, it brought a new layer to the already established dynamic, making it feel somehow more.

Even though the length was quite short in comparison to a lot of the YA out there now, it didn’t feel like it lost anything. With the way the book was designed, breaking it down into days passing, it progressed rapidly, getting through a year in the span of little more than 250 pages. I think it takes skill, being able to create something so rich, so developed, yet managing to keep moving things along without it feeling like corners were being cut. It might have helped that there was no external plot so to speak, it was all internal to Pudge’s group of friends, getting to know them, and him getting to know himself.

I love intelligent humour. It’s something John’s books are full of. It drew me into TFIOS and managed to snag me here as well. But it isn’t just that aspect—the wit. The characters have quirks—qualities that they draw on whenever a situation warrants. Pudge is always calculating how many layers of clothing stand between him and certain girls’ bodies. Along with each of their distinguishable idiosyncrasies, flaws are abundant in them all. There is angst—not the ‘burn this book, they are so stupid’ kind, but the real life, brought on by the fear of the unknown sort.

Comparing the two of his books I’ve read, I’d have to say I enjoyed TFIOS more than this one—but then I’m a sucker for addictive romances. Looking For Alaska has its share, but it doesn’t quite reach the level that I’d been after—still, it had plenty in terms of powerful friendships—and those can definitely form the accelerant for insomnia-induced reading. While I’m not one for smoking—the sneaky lengths they went to light up or to orchestrate one of their retaliatory or ‘for the hell of it’ pranks was to be admired.

They were technically the wrong crowd, but also the right one. If you were going to befriend anyone at boarding school, you’d want ones as fiercely loyal as The Colonel and Alaska—people that would tell you when you’re being a whiney bitch, laugh at you in your self-deprecating moments, then help pick you back up, and fight alongside you to the end. And in terms of getting there—the end, that is—I felt conflicted, but eventually satisfied. It was one of those where you could appreciate it despite itself. If you’ve read it, you’ll know what I mean—if you haven’t, well, I’ll leave that up to you…

Recommended to:
Those who enjoy well-crafted characters first and plot second. If the characters are there, the writer could plop them down in a grocery store, armed with a list and I’d still get a kick out of it.