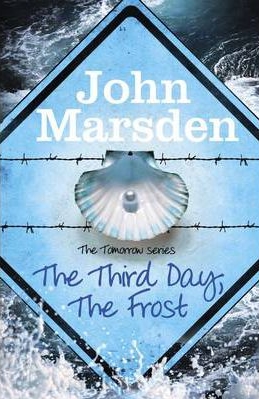 And then there were five….

It has been six long months since Ellie and her friends returned home from a camping trip to find their families and friends imprisoned by an enemy that threatens to steal Australia’s freedom. Only they can stop this. Like seasoned soldiers, their methods have become extreme, even involving terrorism.

When she’s not gathering food and supplies or running like prey to survive, Ellie wonders at what they’ve become: Are they now ruthless terrorists? The more involved and vicious it gets, the higher the stakes are raised. Everyone is fighting for their lives.

Final Thoughts:
Taking an almost 2 year break between books two and three, I found myself surprised at how easily I got back into this series. Picking it up on a whim this week, I rushed through, finding the tense pacing made it almost impossible to catch a breather. Full of action, sabotage, subterfuge and angst—it was a much needed reading cleanser after some not-so-great books. Being my first time reading this Aussie teen war series from the 90s—well, I was forced into reading book one in high school, back when I wasn’t a reader—I’ve still got all of the twists to look forward to. It’s something I love about it. It really does read like a movie.

There’s little in the way of romance this time, with much of the Ellie/Lee package having evaporated somewhere into the ether. The Fi/Homer pairing also seemed to have broken down—it really didn’t feel like anyone wanted to waste their time on love triangles or any of type of shape. There was too much to do, too many plans to make. Taking on enemy forces took the forefront as the main focus. The way their strategies are told—sometimes through telling, and sometimes through showing—it allows you to hope for the best, but know that most of the time, they won’t even come close. Their successes always seem to come at a cost. Nothing is ever clean—which makes that much more exciting to read.

While I can easily find myself getting caught up in the story, I did notice that the book lacked in the descriptive department. Not in every way. There is definitely enough there to paint a vivid picture of the action. But coming to think of it—I got to the end of the book, and I had no idea what any of the characters looked like. I just keep picturing them as their movie counterparts. It’s not that big a deal—I’m guessing, being such short books, the reason why they feel so jam packed with plot is because we’re skimping on the extras.

With a series like this, it’s very easy to find yourself sinking into the characters’ shoes and wondering just how you’d react. With a variety of personalities in their shrinking group, there are plenty of traits to match yourself with. I do like the growth that’s happening though. With each book that passes, the characters have evolved, being put through so much stress and near death situations. Knowing there are four books to go, I’m wondering who’ll be left standing by the end of it. Marsden really doesn’t shy away from bumping off his characters.

Recommended to:
Fans of dystopians who want something with a bit more believability to it. Think along the lines of the tv series, Jericho, but with Aussie teens.