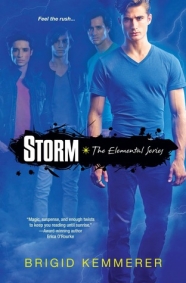 Becca Chandler is suddenly getting all the guys all the ones she doesn’t want. Ever since her ex-boyfriend spread those lies about her. Then she saves Chris Merrick from a beating in the school parking lot. Chris is different. Way different: he can control water just like his brothers can control fire, wind, and earth. They’re powerful. Dangerous. Marked for death.

And now that she knows the truth, so is Becca.

Secrets are hard to keep when your life’s at stake. When Hunter, the mysterious new kid around school, turns up with a talent for being in the wrong place at the right time, Becca thinks she can trust him. But then Hunter goes head-to-head with Chris, and Becca wonders who’s hiding the most dangerous truth of all.

The storm is coming

Final Thoughts:
Finally finished this one! It took me a few weeks, but that was due more in part to a lack of reading time than a downfall on the book’s part. In fact, once I got focussed on Storm, I didn’t want to do anything else. It’s been hard finding a book that could do that in a while. While I didn’t give this one five stars, it was a solid read. A highlight for me was Becca—a main character that was actually likeable. Too often I groan at the idiotic things protagonists get up to, but thankfully, that didn’t happen this time.

The characters were fleshed out pretty well considering the number of them. With so many brothers, I thought I’d end up lost, unable to follow their developments, but somehow, each character felt distinguished. Of course, alternating between Chris and Becca’s point of views, we’re given more insight on them, but with the format this series seems to be following, the other brothers will likely take the spotlight in the books to come. While I’ve only got one brother—a fact I’m thankful for—I still enjoyed reading through their family, the dynamic they’ve got going living on their own. With the twins, Nick and Gabriel, Chris, the baby of the family, and Michael, the makeshift parent—there is plenty of potential to play off here.

Not particularly heavy on the paranormal, the Captain Planet-like abilities that these boys possess don’t take up the majority of the plot time, becoming ancillary to the drama that Becca’s life seemed to be infused with. Usually that kind of tactic frustrates me, but I must have been too interested in the story to notice. Luckily, it wasn’t useless drama, just there to fill the pages. I was happily surprised by Becca and her life in general. She’s been dinted, but she wasn’t broken. She held herself together, but I don’t think she necessarily came across as a tough heroine—she just had a strength about her.

There is a love triangle. Yes, I know people don’t like them. I may be one of the few that actually enjoys them. Still, I wouldn’t let that put you off reading this. There is no instaluv. Becca doesn’t jump into a relationship with either boy, instead becoming something along the lines of friends with both of them. This is the way more books should do it. It might not be as hot and steamy by page five, but it’s a lot easier to read a book when you’re not rolling your eyes. Plus, I think it gives it more impact when you get to watch the relationship slowly start to take shape.

In terms of plot twists, they weren’t massively ground breaking, yet having said that, I didn’t guess any of them. The hints are all there though, which says more about Brigid’s ability as a sneaky writer than my (apparently non-existent) mystery solving prowess. Things did end a little abruptly for my liking, but with my copy of Spark having just turned up in the mail, I think I chose the right time to dive back into this series.

Recommended to:
Those looking for hot guys (that aren’t always douches) and girls that know how to throw a punch.