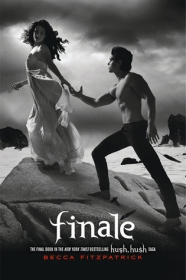 Nora and Patch thought their troubles were behind them. Hank is gone and they should be able to put his ugly vendetta to rest. But in Hank’s absence, Nora has become the unwitting head of the Nephilim and must finish what Hank began. Which ultimately means destroying the fallen angels – destroying Patch.

Nora will never let that happen, so she and Patch make a plan: lead everyone to believe they have broken up, and work the system from the inside. Nora will convince the Nephilim that they are making a mistake in fighting the fallen angels, and Patch will find out everything he can from the opposing side. They will end this war before it can even begin.

But the best-laid plans often go awry. Nora is put through the paces in her new role and finds herself drawn to an addictive power she never anticipated.

As the battle lines are drawn, Nora and Patch must confront the differences that have always been between them and either choose to ignore them or let them destroy the love they have always fought for.

Final Thoughts:
This was the book that just wouldn’t end. Usually I like a long read, but with Finale, I just had to keep putting it down. I think it took me around three weeks to get through this tome. Honestly, I wasn’t expecting it to be a masterpiece judging on the previous books, but I was at least expecting something a little more. Hush, Hush had me addicted, but I’ve been growing more and more frustrated the further I delved into the series. Nora is an idiot—it’s as simple as that. She likes to think she’s not, but she is. If you can put up with that, by all means, jump in, you’ll probably…what am I saying, I can’t recommend this book.

I’m still giving it three stars based on the fact that the writing was bearable, I mean, I’ve read books I’ve literally wanted to throw onto a bonfire, so this one gets points for avoiding that. There were even a few moments in Finale where I found myself feeling something slightly in the ballpark of pride when characters showed some growth, but unfortunately they were short lived, or in worse cases, back tracked, devolving the characters into their previous, moronic selves.

I used to like their crazy antics, or at least get a kick out of rolling my eyes at them, but even that seemed to be missing. It was caught in a weird, in between state. They hadn’t grown enough, but they’d somehow lost what they were. The Nora/Vee shenanigans were almost completely gone. Vee made only a few appearances, instead, leaving Nora hanging out with, or more accurately, bending to the whims of her nemesis, Marcie. It really wasn’t doing much for the likeability of Nora.

With its extended page count, the plot, or what there was of it, wore thin quite quickly. There is only so much training in the woods I want to read about. Having little substance, I found myself wondering what the point of it all was. Basically, in a nutshell: Nora, having sworn to be the leader of the Nephilim (what was the Black Hand thinking?), has the task of taking down all fallen angels or risk dying. But when her boyfriend’s a fallen angel, it makes things a tad complicated. Personally, I’m happy with her saving Patch and sacrificing herself, but that’s just me.

On the plus side, if you were frustrated with Patch throughout the past two books, you’ve got little to worry about this time. Nora and Patch seemed to have gotten over the bumps in their relationship and they’re back to being as nauseatingly corny again. That’s not the biggest endorsement, still, if you’re like me, a completeist, you’ll be happy just for the fact that it’s ending. For a series that’s been all over the place for me, I can at least say that things were tied up nicely.

Recommended to:
Um…maybe just to those that want to see how it ends.