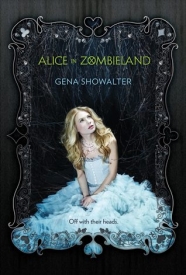 Had anyone told Alice Bell that her entire life would change course between one heartbeat and the next, she would have laughed. From blissful to tragic, innocent to ruined? Please. But that’s all it took. One heartbeat. A blink, a breath, a second, and everything she knew and loved was gone.

Her father was right. The monsters are real….

To avenge her family, Ali must learn to fight the undead. To survive, she must learn to trust the baddest of the bad boys, Cole Holland. But Cole has secrets of his own, and if Ali isn’t careful, those secrets might just prove to be more dangerous than the zombies…

Final Thoughts:
Not quite what I was expecting, but still enjoyable. It did take me a while to get through the start, but I’m putting that down to my haphazard reading schedule as of late. One thing I noticed while reading this, was that the characters are likeable—all of the them. It’s something I appreciate moreso now after a year of sifting through many irritating leads. While the romance didn’t draw me in as much as her Intertwined series, I still found myself enjoying this for the zombie-fighting action. Oh…and Ali’s new best friend, Kat.

With the majority of the story set in their high school cafeteria, you have to be prepared for all that goes along with that. There are cliques, crushes, rumours, fights…yes, this book captures it all. There was probably a bit too much of it for my liking, but Showalter really does make you feel like you’re there. As I highlighted earlier, Kat, the girl born in the limelight, kept me grinning, just as she did Ali. Usually the BFFs grate on you after a while, but she was awesome throughout. Plus, her character does seem to have some depth to her, which is always a plus.

The love interest—Cole—like the blurb states, is the leader of the ‘bad group’ at school. He tells them to jump, they’re already off the cliff. His authoritative nature around his crew was easily one of his better qualities. But it was also a good building block for his character. Showing another side of him around Ali, albeit, one still laced with undertones of his influence, it did make him seem human, playful even. So if you’re after the romance, there is a fair bit of flirting and kissing…oh, and the dreaded, ‘does he, doesn’t he like me’ internal dialogue.

Something I do pride the book on was its ability to evenly lace the action throughout the whole span of the four hundred something pages. I got to about half way, and it had me thinking, ‘this is happening…already?’ It’s good when you’re not stuck wading through three quarters of ‘drama’ before the paranormal kicks in. Throughout each of the fights, Ali gains a little more experience, a little more gumption, more belief that what she is doing is right, and that she’s capable to doing it. Showing her strength, I liked her for that, for not hiding behind others even when they were telling her to do so. Of course, that could have gone the other way, leading her into stupid heroine territory, but luckily she holds herself up.

The twists weren’t anything I’d call major, but they did open new doors leading into the sequel. I can certainly see some interesting problems coming Ali’s way, even if she can’t yet.

Recommended to:
I’m thinking fans of the Soul Screamers series might find themselves at home with Ali and Cole. But really, if you’re interested in the lives of a bunch of high schoolers that take on zombies after school, give it a shot.