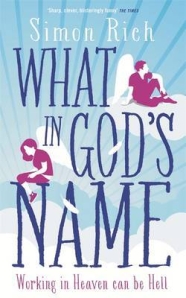 Welcome to Heaven, Inc., the grossly mismanaged corporation in the sky. For as long as anyone can remember, the founder and CEO (known in some circles as “God”) has been phoning it in. Lately, he’s been spending most of his time on the golf course. And when he does show up at work, it’s not to resolve wars or end famines, but to Google himself and read what humans have been blogging about him.

When God decides to retire (to pursue his lifelong dream of opening an Asian Fusion restaurant), he also decides to destroy Earth. His employees take the news in stride, except for Craig and Eliza, two underpaid angels in the lowly Department of Miracles. Unlike their boss, Craig and Eliza love their jobs – uncapping city fire hydrants on hot days, revealing lost keys in snow banks – and they refuse to accept that earth is going under.

The angels manage to strike a deal with their boss. He’ll call off his Armageddon, if they can solve their toughest miracle yet: getting the two most socially awkward humans on the planet to fall in love. With doomsday fast approaching, and the humans ignoring every chance for happiness thrown their way, Craig and Eliza must move heaven and earth to rescue them – and the rest of us, too.

Final Thoughts:
I did not expect to get through this one so quickly. Pretty much in a reading slump lately, I surprised myself the further I found myself getting through the book. Set in the offices of Heaven, it follows the lives of two over-achieving angels employed to take care of the miracles side of the business. While it does seem to play things a bit light-heartedly, it somehow manages to shift the stakes to the extreme without batting an eyelid. It’s an addictively warm romantic comedy that leaves you rooting for not only for the disastrously inept, but fated couple they’re looking after on Earth, but the awkward angels as well.

Personifying God, this book doesn’t quite make him out to be the good or the bad guy. Bored, maybe. Addicted to Asian cuisine, yes. But more of a fence sitter, he appears to be when it comes to the operation of Earth. It creates plenty of humorous situations when prodded by some still-idealistic angels. I did have a problem with the ease and frequency at which characters swore though. Swearing can have its place, but this one seemed to be littered with it whenever any character got even a little bit upset. Restraint, people. There are plenty of other softer words that could have been used.

Aside from that, I really enjoyed myself. Angels scouring their computer screens, initiating a chain of events so intricate for even the smallest of miracles, it creates a sense of greatness to the world. Plus, it poses the question of who to help when doing so will most likely harm someone else. But the nonchalance on God’s part kept things light. I especially found God’s prophet, Raoul, a tin foil-wearing, sign-waving man, shouting at people things like, “the end is coming,” to be a hoot. But once it began focussing more on the New York couple in the second half, I found myself getting into the relationships, hoping for success, but also laughing at their failed attempts. There’s definitely potential for a rom-com movie here.

Recommended to:
If you want a fun few hours, pick this one up.