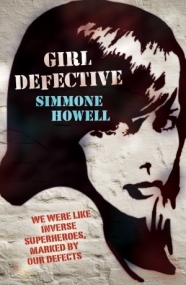 We, the Martin family, were like inverse superheroes, marked by our defects. Dad was addicted to beer and bootlegs. Gully had “social difficulties” that manifested in his wearing a pig snout mask 24-7. I was surface clean but underneath a weird hormonal stew was simmering…

It’s summer in St Kilda. Fifteen-year-old Sky is looking forward to great records and nefarious activities with Nancy, her older, wilder friend. Her brother – Super Agent Gully – is on a mission to unmask the degenerate who bricked the shop window. Bill the Patriarch seems content to drink while the shop slides into bankruptcy. A poster of a mysterious girl and her connection to Luke, the tragi-hot new employee sends Sky on an exploration into the dark heart of the suburb. Love is strange. Family Rules. In between there are teenage messes, rock star spawn, violent fangirls, creepy old guys and accidents waiting to happen. If the world truly is going to hell in a hand-basket then at least the soundtrack is kicking. Sky Martin is Girl Defective: funny, real and dark at the edges.

Final Thoughts:
I was hoping to like this one. The premise sounded fun, but I didn’t expect to love it. But love it, I did. Girl Defective is very near unputdownable. It was struggle come bed time when ‘just one more chapter’ turned into five. Filled with such engrossing, realistic and distinct characters, I felt like I’d picked up a John Green novel. Steeped deeply in family issues, the main character, Sky, holds herself out as the only semi-sane one amongst them. Very easy to connect with, her own angst seems to play second fiddle as she navigates the craziness that keeps gravitating around her.

Set in Melbourne, with its home base in Sky’s father’s vinyl record shop, it should be no surprise that music references pop up on more than the odd occasion. The shop feels like a character in its own right, its regular bunch of eclectic customers, the precision of wits needed for buying records in, the Elvis standee… With the characters bouncing in and out of the family shop, it’s refreshing to read a book where the main character’s home life isn’t non-existent.

And though there’s no massive plot to speak of, Sky and her little spy-wannabe brother, Gully, do spend the bulk of the book each trying to solve their own local mysteries. Gully’s even include profiles on characters in Sky’s life as he meets them and memos he’s drawn up revealing clues obtained along the way. It’s kind of fun, adding something different to drama going on in their lives. Dealing with her brother’s tics and tantrums, Sky tends to humour, letting him go along on his mission, often leading them into many sticky, and not quite legal, situations.

For a secondary character, Nancy really held her own. About four years older than Sky, she was the one guiding her, moulding her into a freer version of herself. With a range of personalities, Nancy changed with the situation though usually retained one aspect of it… she was wild. She swore, stole, spoke without a filter, definitely wasn’t someone you could really rely on, yet Sky still idolized her. I know I wouldn’t get along with her in real life, but she was damn addictive to read. I was constantly finding myself shocked at whatever she would come up with next.

Not to fall short, there’s also a romance in this one. It’s not very well developed, but it’s sweet. Girl drops food on boy, boy gets a job at dad’s shop, boom…attraction sets in. Okay, there’s more to it than that, but you get the gist. Honestly, I enjoyed it. I thought they made a cute couple even with the slight age difference. Both of them broken in different ways, their personalities seemed to mesh well. Plus, he was definitely a lot better for her than Nancy.

Consistently addictive, Girl Defective never lagged. I turned the last page, seeing the ‘Acknowledgments’, and wished there was still more to come—that’s a sign of a good book.

Recommended to:
Those who’ll enjoy a contemporary full of dysfunctional functionality.