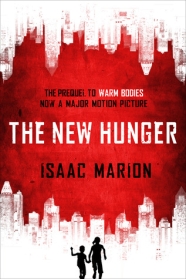 New York is a bayou. New Orleans is a reef. The entire country has been devastated by natural disasters and governmental collapse, and on top of everything else there is the annoying problem of zombies trying to devour you at every turn. But for sixteen-year-old Nora and her younger brother Addis, they are about to discover the most frightening thing yet: being abandoned in this horrific world by their own parents.

Left with only a bag of clothes and a first-aid kit, Nora and Addis begin a harrowing journey to connect with anyone who isn’t looking to rob them or eat them. A wounded man wrecks a meal of green beans and French fries at the top of the Space Needle in Seattle. An attempt to get a good night’s sleep in a fortified motel is ruined by an undead face staring at them through the window. And they just can’t seem to shake someone – something – that’s been following them everywhere they go….

Meanwhile, traveling toward the city with her parents is a young girl named Julie. She is only twelve, but has already seen friends die and her school burn. She has watched her father become nearly as cold and remorseless as the Dead. All she wants is someplace to call home, even if it never really will be.

Final Thoughts:
I was incredibly surprised to find this one waiting for me in my inbox this morning. I had no idea there was going to be more in Warm Bodies world, let alone a prequel and a sequel. After madly devouring it last year, finding The New Hunger today was most definitely what I needed to draw me back into actually enjoying reading. I couldn’t stop, carrying my laptop around just to keep reading when I realised it was beyond time that I cooked myself something resembling dinner. It was that kind of book. Seriously, don’t start it if you have to go to work. Or better yet, take the day off.

Told from three points of view, we’re introduced to the characters separately in the years leading up to the first novel. While it doesn’t dive back far enough to reveal exactly what lead to the zombie outbreak, it does show us how each character came to be who they are, especially so for R. For a lack of a better word, the characters felt alive to me. They’re real people, with real problems, trying to survive. Each a different age, it allows for the alternate perspectives to illuminate just how the time subjected to one way of living before being ripped from it can affect a person’s psyche.

Nora and Addis, a teenage girl and her little brother spend most of the book trekking about on foot as she ponders how they’ll make it through the next day and he tries to have fun. Having been ditched by their parents, these two are remarkably resilient. Balancing the serious with the light-hearted bouts of cop impersonations and gun scavenging—yes, they make hunting for weapons into a game because they’d probably go crazy otherwise.

There are plenty of philosophical interludes weaved throughout this story, much like its predecessor/successor—whichever way you want to look at it. I really find that it adds to the overall depth of the characters, and more importantly, to the readers enjoyment. If a book can make you care about the characters, to feel like their world could just as easily be yours, and manage to give you something to think about, more power to it. That fact that these ones can draw you in with a short page count, it’s astounding.

For those that are looking for the romance of Warm Bodies, this isn’t going to be for you. So don’t go into it and find yourself disappointed. Sure, R and Julie are both there, but being a prequel, they obviously haven’t met yet. This novella is for those want to get to know the characters better, for those that want to understand just a bit more about the world in which they live, about them coming to grips with reality. This one is for those that just love a good story.

Recommended to:
Definitely check this one out before you see the movie, and if you haven’t started the series, maybe even before you read the first book. Or if you’re like me, after, either way, just read it!