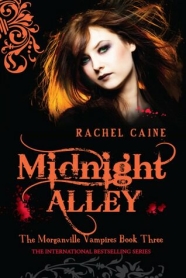 Morganville is such a nice place to live… And die. If you don’t mind that sort of thing.

When Claire Danvers learnt that her college town was run by vampires, she did what any intelligent, self-preserving student would do: she applied for a transfer and stocked up on garlic. The transfer is no longer an option, but that garlic may come in handy.

Now Claire has pledged herself to Amelie, the most powerful vampire in town. The protection her contract secures does little to reassure her friends. All of a sudden, people are turning up dead, a stalker resurfaces from Claire’s past, and an ancient bloodsucker extends a chilling invitation for private lessons in his secluded home.

Final Thoughts:
Stepping back into this series almost two years after finishing The Dead Girls’ Dance I have to wonder why I left it for so long. I could barely put it down over the past day. It was like catching up with an old friend, slipping right back into conversation like no time had passed. The main character, Claire, and her three housemates, are such a likeably unique bunch. Each of them smart—most of the time—and able to steer well enough clear eye-roll-inducing mush that some other books have led me to recently.

Recently upending her life after only a couple months in a town designed for, and run by, vampires, sixteen year old Claire has pretty much signed away the future she’d thought she’d had. Giving the town’s head vampire, Amelie, control over her in order for her friends’, and her own, protection showed a lot of guts for her character last time around, but living with the consequences is where the reals tests come to light. While she does struggle with her guilt, trying to keep secrets, her actions were quite fitting for her age, or even someone older.

Not to be outdone by Claire, the other inhabitants of the Glass house do get their fair share of the character development. In fact, I think they’re what makes the series work the way it does—the four of them. Michael, a recently turned vampire, nee half-ghost struggles to keep the house together, meanwhile trying to deal with the implications of his new life. Eve, his goth girlfriend full of protectiveness for her friends and generally a big ball of sass. And then there’s Shane, Claire’s not-sleeping-with-yet, vampire-hating boyfriend. Makes for fun dinner conversation.

With girls turning up dead in town, and around their house, the mystery keeps you guessing. Targeted by vampires, police, vampire-police and even vampire-fanatics, life is never easy for them. But on top of that, we’re introduced to a new quirky vampire, Myrnin, with a perchant for eating his apprentices. And because of her contract, Claire is forced into becoming the next one. He was easily the highlight of this book for me. His manic rants and personality shifts left you on edge, but desperately hoping for him to pop into a scene again.

The pages fly by, leaving the book feeling shorter than it actually is. Though I’m only at book three in this seemingly never-ending series, I’m already finding it quite smart the way pieces are falling into place. For a small town, there is so much to it. Morganville’s secrets are gradually coming to light, but I still feel like I’m in the dark. Luckily I’ve got a huge stack left to go. And after that ending, I don’t think I’m going to be able to wait another two years.

Recommended to:
Those who like their vampires evil and their heroes tough. Plus a bit of romance that won’t leave your eyes rolling.