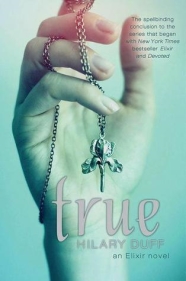 Following the harrowing events of Elixir and Devoted—and the ceremony that almost killed Sage—Clea faces a new reality: With Sage’s soul in Nico’s body, the love of her life looks an awful lot like her best friend’s boyfriend. Can Clea and Sage really be happy under these circumstances?

Clea wants to try to enjoy their new life together, but Sage is acting different—angry—and she struggles to keep her friends from finding out what has happened to him. Something is clearly haunting Sage, and Clea is losing control. Can she trust her friends with the dangerous truth, or will she have to risk losing Sage to madness?

Final Thoughts:
Coming from a massive Hilary fan from way back, I have to say I didn’t like this book. What happened? Elixir showed a lot of promise, adding in mystery, warring factions, and a fun romance. It went downhill in the second book, but compared to this one, it was a masterpiece. Okay, it wasn’t a masterpiece, but it put this one to shame. There’s barely a plot anymore and the romance, it’s hardly setting a good example. Sage has become physically abusive and Clea just puts up with it. What’s worse is that she tells us she’s not one of those girls, but everything she does just shows that she is.

The Elixir is now gone, putting the whole reincarnation aspect of the series out to pasture. I’m kind of disappointed they did this. No, I’m really disappointed. There was so much put into building up the mystery behind the Elixir and Clea’s dad’s fascination with it, so if you’re writing a final book, why not finalise things? Her dad’s disappearance/assumed death was never mentioned again. It was like they just forgot about it, too caught up in the middle of the violent Sage soul transfer mess. Yes, the whole book revolves around the body-switching plot.

Like the previous book, True is also told through two points of view. Stepping into Rayna’s head was…interesting. I’m not quite sure if it was a good thing or not. I can say this though, she sure knows how to lock onto a thought and jump to conclusions, usually involving whole inner-rants where she seems very unstable, to me at least. Even though Sage is supposed to be the one with the mood swings, Rayna isn’t exempt from the same flip-floppedyness (Yes, I know. I like to make up words).

The twist. I feel like clenching my fists in the air and going on my own mini rant about that. I can’t stop shaking my head. It wasn’t a good twist. There was no build up. It was thrown in at the last second with an explanation that made no sense. I’m sorry, but bad guys aren’t ‘that’ stupid. Really? Really? REALLY? That was the ending? I can barely type, words just keep escaping me. Thinking about this book is upsetting me. I stuck with the series and this is what I got. Where are the answers?

The only reason it’s getting two stars is because it was so easy to read. I flew through it. Admittedly, the writing is double spaced and huge, so that might’ve played a part in that. If you can put up with Sage throwing Clea into a wall and cutting her head open, then taking off without remorse, you might enjoy this more than I did. Unfortunately, that kind of thing just isn’t for me. If only Elixir had been a standalone…