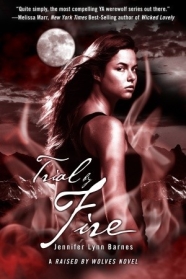 Bryn is finally settling into her position as alpha of the Cedar Ridge Pack—or at least, her own version of what it means to be alpha when you’re a human leading a band of werewolves. Then she finds a teenage boy bleeding on her front porch. Before collapsing, he tells her his name is Lucas, he’s a Were, and Bryn’s protection is his only hope.

But Lucas isn’t part of Bryn’s pack, and she has no right to claim another alpha’s Were. With threats—old and new—looming, and danger closing in from all sides, Bryn will have to accept what her guardian Callum knew all along. To be alpha, she will have to give in to her own animal instincts and become less human. And, she’s going to have to do it alone.

Final Thoughts:
Not as compelling as its predecessor, Trial By Fire felt like it was lacking something for a good chunk of the book. With Bryn now an Alpha, there is a distinct change in the dynamic, but personally, I didn’t think it was one for the better. The politics take over the story with very little actually going on until the final quarter. When it got going, it became great, so I’m left wondering if the pacing had been tweaked if I would have enjoyed this book a whole lot more than I actually did.

The first book was all about the characters for me, yet, unfortunately, Bryn’s former Alpha, Callum, barely makes an appearance this time around. But even with those at the forefront, it still felt as if they paled in comparison to Bryn’s new Alpha status. Their personalities were toned down and it became harder to actually care about what happened to any of them unless they were put in direct mortal danger. I understood that their situation wasn’t the best, but there was little fun to be had. It was all a big internal struggle of, “How can I choose his wellbeing over the pack’s?”

Likewise, the Chase and Bryn’s romance takes a backseat. While it wasn’t the epicentre last time, for the most part, I felt that Bryn could have been dating any of the characters had we been told so for the lack of interaction she and Chase had. There are a couple moments that define the two of them and where they stand, but it was nothing to swoon over. If you’re reading this book, you’re reading it for the werewolf plot. That’s the focus. Alpha. Alpha. Alpha.

While Shay, her best friend’s evil brother, is still trying to take her down and steal her female wolves, he doesn’t serve as the main threat. Instead, we’re treated to a bunch of humans with an axe to grind against werewolves. I appreciated how this widened the breadth of the series’ world, filling in the blanks to some of the questions I hadn’t even thought to think of. But honestly, that was about all it was good for. Not much happens. It’s basically a book of threats, with Bryn going stir-crazy over what to do.

My attention piqued as the threats bubbled over and people actually started doing something. Again, I have to question the pacing. Why did we have to spend so long working up to the confrontation? Books can have more than one conflict, in fact, looking back another ‘were’ series I loved, The Shifters, I have to wonder why things weren’t done differently here. Aside from pulling me back in at the end, Trial By Fire was nowhere near un-put-down-able.

Recommended to:
Those who want to war over the inner workings of a teenage werewolf Alpha.