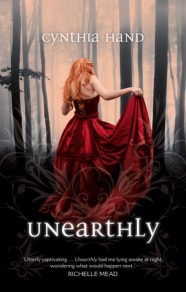 Clara has known she was part-angel ever since she turned fourteen two years ago, but only now is her Purpose – the crucial rite of passage for every part-angel – becoming clear to her. Clara′s Purpose leads her family to Wyoming, where, amidst terrifying scenes of a bush inferno, she finds the boy of her visions, Christian. He is everything she could wish for – so why does she also have feelings for her enigmatic classmate Tucker?

Clara discovers that her Purpose is only a small part of a titanic struggle between angels and their destructive counterparts, the Black Wings. And when the fire of her visions erupts and both Christian and Tucker are in danger, who will she choose to save?

Final Thoughts:
Stepping back into the angel genre after a much needed break, Unearthly tried its best to tone down the clichés where it could. Parents are live and in the picture, leading girl has a sibling, and instaluv, its nowhere to be seen. I was thankful for all of that. But on the flipside, it still felt like one of those fourth quarter plot kind of books. You know the ones, books where it’s basically all high school angst until you reach the last quarter and you finally get a taste of the supernatural plot it’s been hinting at the entire time.

There’s also a love triangle. Yes, everyone seems to hate them now, but I think this one manages to pull it off. Clara, aka Carrots or Bozo (this girl gets teased almost constantly for her bright orange hair), never seemed to be into both guys at the same time, rather it felt like after a time her switch flipped and she started seeing the other guy in a new light. I think that made the situation seem more believable. She doesn’t jump into relationships easily, instead, we get to see them grow and start to feel that her connections are real. I think this is where the book excels. More time is definitely spent developing characters than the paranormal plot.

I wouldn’t call it an even spread, though. Much of the first half of the book stays close to Clara’s high school life, her best friends and her distinct un-popularity in the small country town. I do enjoy this kind of thing, but it could have been shortened. I mean, there is only so much angst you really need in a book. Adding in the self-exploration that Clara went through discovering her angel side helped keep it interesting. But for a book that seemed to be avoiding clichés, it went and added in a prom chapter for good measure. All I can about it is that it was used well in switching things up plot-wise.

As far as angel stories go, Clara’s world was fairly vague. I only really gathered two things: angels have a purpose, their one task set down on them from heaven, and there are bad angels known as Black Wings. Coming out of this book, I have no idea what the overarching plot of the series is likely to be, and personally, as it stands, it feels weak to me. Sure, it had an exciting finish, but I wouldn’t call it gripping. I’m much more interested in what’s going on with the characters than anything else—particularly the mystery around Clara’s family. If we delve more into what’s going on with Jeffrey in the next book, I’ll be happy.

Recommended to:
Those who enjoyed the Fallen, Hush, Hush style. Clara’s a bit more headstrong, but otherwise, they’re on the same track.