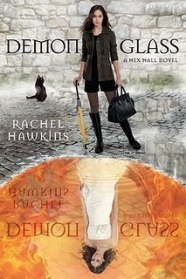 Sophie Mercer thought she was a witch. That was the whole reason she was sent to Hex Hall, a reform school for delinquent Prodigium (a.k.a. witches, shape-shifters, and faeries). But then she discovered the family secret, and the fact that her hot crush, Archer Cross, is an agent for The Eye, a group bent on wiping Prodigium off the face of the earth.

Turns out, Sophie’s a demon, one of only two in the world-the other being her father. What’s worse, she has powers that threaten the lives of everyone she loves. Which is precisely why Sophie decides she must go to London for the Removal, a dangerous procedure that will either destroy her powers for good-or kill her.

But once Sophie arrives, she makes a shocking discovery. Her new housemates? They’re demons too. Meaning, someone is raising demons in secret, with creepy plans to use their powers, and probably not for good. Meanwhile, The Eye is set on hunting Sophie down, and they’re using Archer to do it. But it’s not like she has feelings for him anymore. Does she?

Final Thoughts:
Hex Hall proved an addictive read for me, finishing it in a single sitting, but this time around, I found it hard to reconnect. Leaving the school behind, we’re sent to the magic council in England, but it’s not nearly as exciting. They’re in a massive building with over thirty kitchens—that was about as exciting as it got. Plus, removed from the school setting, all of the bitchiness is gone. You might say that’s a good thing, but without the tension, it fell flat. I cared little about Sophie’s ‘romance’, so the lack of plot for most of the book left me with hardly anything to hang onto.

Perhaps I would have enjoyed this more had I read it straight after Hex Hall a few years back, but honestly, I think ditching the school is what did it for me. Sure, we’ve still got Sophie and Jenna—and occasionally, Cal, but those three weren’t enough to keep the book afloat. We spend chapters going through libraries, having breakfast, shopping for dresses. Sorry, but I want plot. The introduction of two new teenage demons was interesting at first, but it didn’t really become much of a focus until around the ninety percent mark.

Most of the time, we spend it in Sophie’s head while she makes a few witty remarks to herself. I admit, I did get a few chuckles, but it didn’t make me love her as a character. I was usually annoyed by her. She went on and on about the bad boy, Archer, and why she couldn’t be with him because of their starcrossed lovers situation, but then ignores her own advice frequently. It seems that whenever the two of them get in the same room, she has to follow her heart no matter the consequences. Okay, some people might like that kind of thing, but I just had to shake my head at it.

There is a bit of action amidst all of the pining, but it’s quite rare. The scenes would come, and then they’d be over in a page or two. We’d just skip ahead and go to the aftermath. And those action bits were actually kind of exciting too. We could have done without the shopping and focussed more on the magic war, but then maybe that is what the third book is for. I can only hope.

I know it’s sounding like I hated the book, but it was okay. Not as good as the last one I read, but then again, it’s not the worst. Jenna, Sophie’s vampire best friend, helped capture some of what I liked about the first book. I also found Sophie’s demon dad a great new addition. But the love triangle—no, I’d have to say I’d pick neither team. I’ll be back for the third instalment, but only because of this one’s ending. It looks like everything’s about to finally go down.

Recommended to:
Love triangle fans, and those who like a light read.