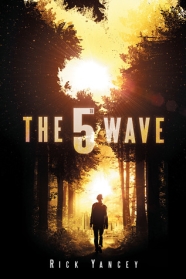 THERE WILL BE NO AWAKENING.
After the 1st wave, only darkness remains. After the 2nd, only the lucky escape. And after the 3rd, only the unlucky survive. After the 4th wave, only one rule applies: trust no one.

Now, it’s the dawn of the 5th wave, and on a lonely stretch of highway, Cassie runs from Them. The beings who only look human, who roam the countryside killing anyone they see. Who have scattered Earth’s last survivors. To stay alone is to stay alive, Cassie believes, until she meets Evan Walker. Beguiling and mysterious, Evan Walker may be Cassie’s only hope for rescuing her brother—or even saving herself. But Cassie must choose: between trust and despair, between defiance and surrender, between life and death. To give up or to get up.

Final Thoughts:
When your friends and your enemies all look alike, how do you know which one to kill? When the Aliens who have invaded your planet, and the forces who wish to rebel against them are both human, how would you know what side you’re fighting on?

In The 5th Wave we follow the stories of the youths caught in the wreckage of a full scale assault on human kind by the mysterious ‘Others’, and gearing up for the rumoured fifth—and supposedly final—wave of attack by the invaders.

Now, I’m only a guest reviewer here, and not accustomed to YA Fiction (in fact I’m pretty sure this was only the second novel of this genre that I have read), but from what I have seen on the shelves, there doesn’t seem to be many YA novels which choose the subject of alien invasion. Most opt for vampires, witches, the supernatural and lots of smooching. That said I hope this imbalance does not infer that the preferences of YA readers will stop them from giving this incredibly enjoyable novel a chance.

There are three POVs we follow in this story, and as you may be aware of Brett’s dislike of multiple view-points, rest easy—this novel is well executed, and it surrounds a plot which kind of makes you actually want to get into everyone’s head. The first and major character in this novel is the solitary and distrusting Cassie, short for Cassiopeia, as she tries to hunt down her kidnapped brother. Intelligent, determined and, most importantly, humane, Cassie struggles in her journey through violent confrontations and suspenseful encounters toward the unknown until she acquires an unlikely and suspicious companion.

Secondly we follow the story of Zombie, a boy dying from the ‘Red Death’ (a disease released as part of a previous wave), and who is miraculously healed at an army base and enlisted into their sinisterly run child-army. The two of them, amid their own hardships, strive to keep their humanity in the middle of a war where that very humanity could get them killed. And thirdly we are in the head of Cassie’s brother as he is taken to the very same base, and placed into the charge of Zombie and his squad of child soldiers; and though his actions and POV are minor, his childish innocence is the driving force of the main characters in their quest for victory over the ‘Others’ and their own self doubt in their humanity.

All the characters—even the minor and supporting ones—were easy to get to know and slip into their shoes; and there were absolutely no characters that could be described as ‘that one annoying idiot’. Dialogue was splendidly natural and candid when it came to confrontations, and the sincerity of the characters in their triumphs and breakdowns could not be doubted.

Romance, though aspects of it are present for the teens in this book, only serves to cement the reality that, though they are in a battle for survival, these are still only kids with dreams of a future, and it does not distract from the main plot. It stays realistic, thankfully, and doesn’t completely dwindle down to the tackiness of a star-crossed soapie—you know what I mean? “Oh, Jackleberry, I love you and I want us to be together forever! Please, hold me close.” “But how can I, Crystal Pickerdiss, when my arms are slimy tentacles? I’m a monster!”

The 5th Wave is a suspense filled joyride with twists which, though some may label as typical, kept me on the edge of my seat till the very last words. I loved all the good guys, and actually became tense (and sometimes frightened) whenever a suspected villain opened his or her mouth to speak.

Recommended to:
People who wanted The Host without the love square.