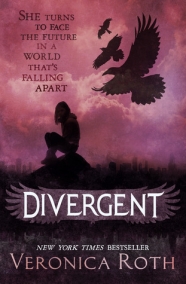 In Beatrice Prior’s dystopian Chicago world, society is divided into five factions, each dedicated to the cultivation of a particular virtue–Candor (the honest), Abnegation (the selfless), Dauntless (the brave), Amity (the peaceful), and Erudite (the intelligent). On an appointed day of every year, all sixteen-year-olds must select the faction to which they will devote the rest of their lives. For Beatrice, the decision is between staying with her family and being who she really is–she can’t have both. So she makes a choice that surprises everyone, including herself.

During the highly competitive initiation that follows, Beatrice renames herself Tris and struggles alongside her fellow initiates to live out the choice they have made. Together they must undergo extreme physical tests of endurance and intense psychological simulations, some with devastating consequences. As initiation transforms them all, Tris must determine who her friends really are–and where, exactly, a romance with a sometimes fascinating, sometimes exasperating boy fits into the life she’s chosen. But Tris also has a secret, one she’s kept hidden from everyone because she’s been warned it can mean death. And as she discovers unrest and growing conflict that threaten to unravel her seemingly perfect society, Tris also learns that her secret might help her save the ones she loves . . . or it might destroy her.

Final Thoughts:
Arriving quite late to the party, I only picked this one up because the looming movie release date was getting me antsy. I like comparing what I’ve read to the screen, not the other way around. Having just finished the first book in the series, I’m left wondering why I didn’t grab it sooner. I keep telling myself dystopian isn’t for me, but I devoured this book. It never lagged. Every single page kept me hooked.

Tris was just such an addictive main character. I didn’t find her annoying or whiny (except in her occasional self-deprecating moments)—she definitely wasn’t stupid. She makes tough decisions, deals with the ramifications, gets hurt, basically, she feels real. Her journey is a progressive one, her character evolving over the course of her initiation training. Looking at the movie trailer, they don’t really portray much of this, which worries me they may be favouring skipping ahead to the action packed ending, but then again, it’s only a trailer.

I got a Nikita-esque vibe, almost like we’d stepped into Division while reading this—not that that’s a bad thing. I love internal conflicts. While most that stays in the background throughout this book, it’s set up well enough to lead into the rest of the series. Instead, Divergent plays on the initiation process, and culling the initiates through a series of trials. The way in which it’s done was quite inventive, using simulations playing on peoples’ fears. But the characters form the main focus rather than the situations. Forced into a game of mental warfare, once the cracks start to show things get interesting.

Trust quickly becomes a commodity, and the friendships get tested. I can’t say I became attached to those friends of Tris’, but I did enjoy whenever they popped up. It really felt like hers was more of a solo mission, forced into hiding her Divergent secret. Watching her lie, at least by omission, showed some sensibility about her, but did keep her closed off. It’s not until things start to click with one of the older guys training, Four, that she opens up a bit. A slow burn of a romance ensues. Very well done. It gave us time to really want it just as much as they did.

As far as bringing on a killer ending, I have to say, it didn’t let up. I had a moment of glassy eyes, wondering why she’d done what she’d done. But I think the book worked all the better for it. It’s going to look great on screen—but those poor stunt doubles. It’s like Roth thought, ‘what kind of crazy stuff haven’t I thrown at them yet…oh yep, *types away maniacally*.’

Recommended to:
Basically, the few people that still haven’t read it. There’s no real other qualification. Just give it a go.