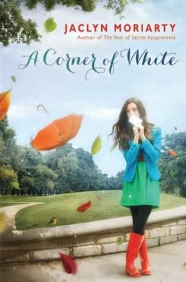 This is a tale of missing persons. Madeleine and her mother have run away from their former life, under mysterious circumstances, and settled in a rainy corner of Cambridge (in our world).

Elliot, on the other hand, is in search of his father, who disappeared on the night his uncle was found dead. The talk in the town of Bonfire (in the Kingdom of Cello) is that Elliot’s dad may have killed his brother and run away with the Physics teacher. But Elliot refuses to believe it. And he is determined to find both his dad and the truth.

As Madeleine and Elliot move closer to unraveling their mysteries, they begin to exchange messages across worlds — through an accidental gap that hasn’t appeared in centuries. But even greater mysteries are unfolding on both sides of the gap: dangerous weather phenomena called “color storms;” a strange fascination with Isaac Newton; the myth of the “Butterfly Child,” whose appearance could end the droughts of Cello; and some unexpected kisses…

Final Thoughts:
The cover got me with this one. It was so colourful and quirky, plus I found the title a little strange, so I just had to pick it up and see what it was about. Reading the humorous introduction in store, I snatched it up and put it next in line on my to-read list. Unfortunately, once I got into it, I didn’t find it as gripping. I think I’d expected some kind of note-leaving romance like in The Lake House, but instead found chapters upon chapters of friendship drama. It was really a struggle to get through the first half of the book, so it surprised me when things suddenly turned around midway and I became addicted this story. It’s left me polarised on how I view the book. Finishing it, I felt like it was excellent, but then I have to remember the weeks I spent chugging along through the first half, wishing it would end.

If you’re going into this expecting some great romance like you’d find in some of the better contemporaries, you’ll be disappointed. The characters do have love lives, but they’re not the focus of the book. I can see it possibly happening in the future, or at least becoming more prevalent, but for this one, it’s heavily centred on the world building. It was great, by the way. Jaclyn has clearly spent lots of time thinking her worlds through, creating backstory for every character, tying it all together with an expert’s precision.

The problem I found, though, was that it could get too caught up in doing that. I’m a reader that likes sticking with our main character, or characters (for dual point of view books). When we start going off and jumping back and forth to each and every person’s point of view, I lose that connection I was starting to form. I don’t need to see inside everyone’s head. We can get to know them and their backstory through our leads. There were points when I felt like we weren’t even inside anyone’s head. It was like there was an unknown narrator, just looking down over the town, seeing what everyone was doing.

As far as the first half of the story went, the only times I really found myself enjoying things were when Elliot and Madeleine were writing letters to each other. Her convinced he was some fantasy nerd making everything up was a fun way of adding some believability into their situation. Other than that, I didn’t feel like much was happening. It was all about the two characters hanging out with their friends or being attacked by Colours now and then when they flew through the kingdom.

I can’t quite recall what happened or how things finally clicked for me, but suddenly, things starting getting more serious. Their lives basically began to fall apart and I couldn’t stop reading. Plus, once the twists started coming, the clues she’d left all lighted up in my brain and I kept having those moments of ‘wow, that’s smart’. I love it when that happens. So now I’m torn. I actually do kind of want to read the sequel, but I’m wondering if it’s going to slow things down again before speeding up to another awesome finish.

Recommended to:
Fans of crossovers between reality and fantasy.