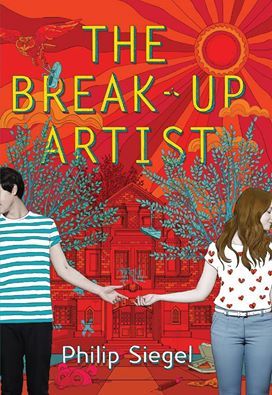 Some sixteen-year-olds babysit for extra cash. Some work at the Gap. Becca Williamson breaks up couples…

After watching her sister get left at the altar, Becca knows the true damage that comes when people utter the dreaded L-word. For just $100 via paypal, she can trick and manipulate any couple into smithereens. With relationship zombies overrunning her school, and treating single girls like second class citizens, business is unfortunately booming. Even her best friend Val has resorted to outright lies to snag a boyfriend.

One night, she receives a mysterious offer to break up the homecoming king and queen, the one zombie couple to rule them all: Steve and Huxley. They are a JFK and Jackie O in training, masters of sweeping faux-mantic gestures, but if Becca can split them up, then school will be safe again for singletons. To succeed, she’ll have to plan her most elaborate scheme to date and wiggle her way back into her former BFF Huxley’s life – not to mention start a few rumors, sabotage some cell phones, break into a car, and fend off the inappropriate feelings she’s having about Val’s new boyfriend. All while avoiding a past victim out to expose her true identity.

No one said being the Break-Up Artist was easy.

Final Thoughts:
This book had me from the start. Perhaps it’s my current contemporary fixation, but I found this so easy to get into. I love it when I pick up a book and it just clicks with me. You’re not counting how many pages left until it ends, you’re counting them, wishing there were more. Becca was such a loveable anti-hero, championing the destruction of relationships. The way she saw the world was refreshing, albeit, cynical—but I loved that. Her occasional outbursts had me grinning. She’s that little voice in your head whenever you read something corny that everyone else swoons over.

Caught up in high school politics, where status was determined by who you ate lunch with and whether or not you were romantically paired off, Becca’s mission felt just, even if she was messing with peoples’ lives. She wasn’t going about it maliciously, as if everyone deserved to be miserable. Her motives came more from her own sense of betrayal, and empathising with others finding themselves in similar circumstances. Watching friends being ditched for a chance at coupledom, it made me think of other romances I’ve read where the side characters seem to become insignificant once the main couples shacks up. There are a few groan-worthy YA pairings I wouldn’t have minded hiring Becca for.

As the blurb says, Becca takes on the task of bringing down the school’s power-couple. Her biggest mission so far. Involving her ex-best friend, it plays out very much like a high school teen movie. Bitchiness and gossip—it’s a lot of fun. I thought I was past enjoying angst, but I’m realising I just haven’t been reading the right kind of angst. This one did it in just the right way. I cared about these characters, feeling like I was a part of the story. The state of their friendships mattered to me, even ones I’d thought I wouldn’t have cared for.

In typical fashion, Becca’s family gets a look-in periodically, letting us see more of what drives Becca to do what she does. It proved to be a good thing, though. I actually liked that her twenty-something sister also had a journey to go through, at times acting more immature than Becca. She would lock herself in her room watching an endless supply of sitcoms. Being in my early twenties myself, it was good to see a character of that age bracket that wasn’t portrayed as a full-on adult already.

The Break-Up Artist is about the importance of friendship, not romance. Sure, it has its moments, but I found myself rooting more for the girls to patch things up than for true love or some other nonsense to win out. I really think more people should be reading this. It’s a stark contrast to a majority of the other YA out there. Even if you enjoy a good romance, there’s enough sincerity in these characters struggles to connect with, plus it’s damn hard not getting swept up in the fun of all of the plotting and scheming.

Recommendation:
Sick of love stories that make you gag? This is for you.