May
16
REVIEW: “All Our Yesterdays,” Cristin Terrill
Posted in "Book Reviews" • Add Your Comment? 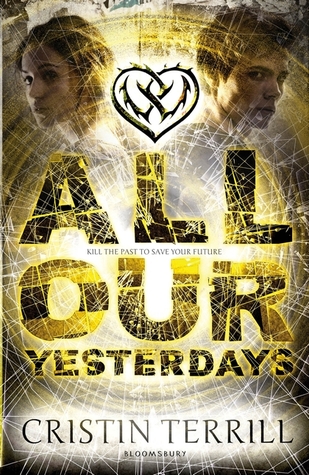 Em and Finn have a shared past, but no future unless they can find a way out. The present is torture – being kept apart, overhearing each other’s anguish as the Doctor relentlessly seeks answers. There’s no way back from here, to what they used to be, the world they used to know. Then Em finds a note in her cell which changes everything. It’s from her future self and contains some simple but very clear instructions. Em must travel back in time to avert a tragedy that’s about to unfold. Worse, she has to pursue and kill the boy she loves to change the future.

Final Thoughts:
Un-put-down-able, that’s what this book would have been had I not needed to work, eat or sleep. Every chance I got, I had this book in my hands, frantically trying to see how things would play out. The first page had me hooked, which was certainly a good sign. Some books you just trudge through, but this one had me actually wanting to read, just for the enjoyment of reading. There doesn’t seem to be a lot of time travel YA out there, so I usually jump on them whenever I spot one. And unlike Julie Cross’ Tempest, which was ‘Boy loves girl. Girl dies. Boy goes back to save her’, All Our Yesterdays shook things up with ‘Boy tortures girl. Girl hates boy. Girl goes back to kill him’.

The time travel aspect doesn’t play as big a part in this novel. Instead, once the timeline shifts back to the past, we stay there for the bulk of the book. That could have been a deal breaker for me, but with what came next, it wasn’t. Almost like 24, it felt like every moment counted. The two main characters, Em and Finn, spent their time racing about, trying to kill the boy that invented, and the let the government abuse, time travel. The fact that that boy used to be their childhood friend, that just made things all that more emotionally clawing. Murdering someone in the past before they had done the bad things they would later do would have been a hard task for anyone.

Em and Finn’s relationship was structured really well, having the characters together at the start of the book. I liked that they had those four years of history together, living on the run from government agents and the police-state world that time travel had created. Going back to the past, seeing their previous selves barely getting along, that was fun too. Their younger versions felt almost like different people, living carefree lives, caught up in teenage angst and family drama. I had to pause at first, checking I was reading the same book. It felt so out of place before the plots in the two points of view started to converge. But once they did, it was just, well, awesome. I didn’t prefer one over the other. Both girls brought something to the table that the other couldn’t, keeping my level of tension ramped up. I HAD to keep reading.

It was never black and white, the mission they were on. Sure, stopping, or rather—killing, their friend was their intention, but they were never happy about it. Distinguishing between monster and boy became a struggle for them—and me as well. I couldn’t decide whether I wanted him dead or not. Seeing things from both sides really helped build that inner turmoil for me. Of course, there were moments where I was all, ‘Take the shot. Kill him. Kill him, he’s evil!’ But there were other moments that just broke me down and made me want them to try everything else on their list again. This has to be what made this book so great—the villains and the heroes changed roles constantly to the point where just about everyone could have been seen as good or evil depending on your perspective.

Recommended to:
Anyone after something gripping that will keep your character allegiances a little murky.