May
21
REVIEW: “Guardian Of The Dead,” Karen Healey
Posted in "Book Reviews" • One Comment 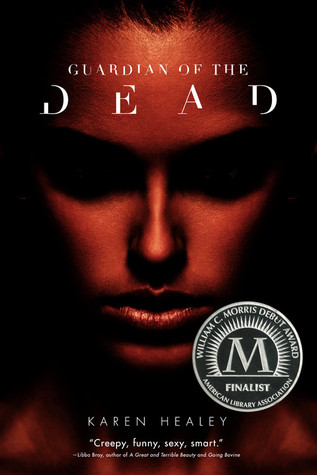 Seventeen-year-old Ellie Spencer is just like any other teenager at her boarding school. She hangs out with her best friend Kevin, she obsesses over Mark, a cute and mysterious bad boy, and her biggest worry is her paper deadline.

But then everything changes. The news headlines are all abuzz about a local string of serial killings that all share the same morbid trademark: the victims were discovered with their eyes missing. Then a beautiful yet eerie woman enters Ellie’s circle of friends and develops an unhealthy fascination with Kevin, and a crazed old man grabs Ellie in a public square and shoves a tattered Bible into her hands, exclaiming, “You need it. It will save your soul.” Soon, Ellie finds herself plunged into a haunting world of vengeful fairies, Māori mythology, romance, betrayal, and an epic battle for immortality.

Final Thoughts:
Admittedly, this wasn’t my favourite book. I liked the characters, even found myself letting out sharp bursts of laughter, but the plot dragged. It really felt like a chore getting through it. Being a standalone, I had expected this to be fast-paced, full of action from the get-go. Instead, we spent chapters upon chapters with the characters practicing for a university theatre production which really did nothing for the plot except in showing us how creepy one of the characters was. And with the lengthy, overly-descriptive chapters, it just kept leaving me with the feeling of wanting to put the book down and do something else.

Set in New Zealand, I was hoping for something different, and this certainly delivered in that regard. It’s full of Māori legends, Māori words, PACKED—too much of it, I think. There were times when a whole page went into great detail listing off names, words, histories. My poor brain couldn’t retain it all. I found, by a certain point, my eyes just started glazing over the words, unable to pronounce them, instead thinking, oh, that word again. Little did I know, there was actually a glossary waiting for me at the end of the book. It probably would have helped with things had I seen that earlier, but you shouldn’t need notes to be able to enjoy a book.

Like I mentioned earlier, the characters were what kept the book together for me. While the main girl, Ellie, did have a habit of putting herself down regarding her looks, commenting on her tall stature and lack of a stick thin figure, she otherwise didn’t bother me. I found her quips humorous, especially the way in which she leapt to conclusions that magic must be real. She took her time in doing so, but once she did, she went all in. I also appreciated that the side characters became involved in the magician/faery plot, getting their hands dirty, so to speak.

While it tries at the romance, I wouldn’t call the relationship building throughout the book addictive. That’s happening with a lot of books lately for me. It’s rare now that something sweeps me up and makes me believe that the characters are people that really need to be together. With Ellie, I would have preferred she’d stayed single and focussed on her friendships, because that was where I found the most believability. Those character entanglements felt real to me, their bonds growing out of circumstances, and other simply being tested by them.

The second half, to last third of the book was the most exciting part. Once the play rehearsals were shoved out of the way, I flew through the rest of the book—or struggled with it less. Evil, yet nameless, characters were introduced, and the danger became real. It suddenly switched things up and the pacing took on a real-time feel, racing to save New Zealand’s inhabitants from imminent disaster. This is where the book should have been the whole time. I would have been hooked—albeit, still trying to wade through all of the Māori terms.

Recommendation:
I say if you want to give this a go, push through the first half and try and get it done in one sitting. You’ll probably enjoy it more that way.