May
09
REVIEW: “The Future of Us,” Jay Asher & Carolyn Mackler
Posted in "Book Reviews" • One Comment 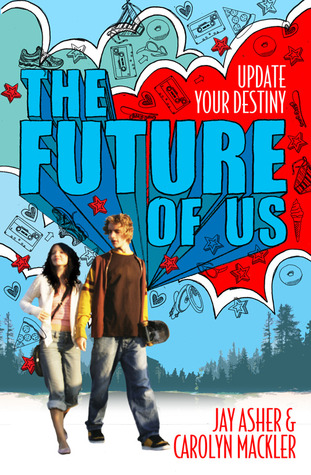 It’s 1996 and very few high school students have ever used the internet. Facebook will not be invented until several years in the future. Emma just got a computer and an America Online CD. She and her best friend Josh power it up and log on – and discover themselves on Facebook in 2011. Everybody wonders what they’ll be like fifteen years in the future. Josh and Emma are about to find out.

Final Thoughts:
I wasn’t into contemporaries back in 2011 when I got given a copy of this at a Becca Fitzpatrick event that Simon & Schuster were hosting, so I’m glad I waited before finally jumping into it. Perhaps I’ve grown tired of paranormals, but it’s as if a switch has since flicked and I can’t get enough of these kinds of books. While this one does feature Time Travel by way of a computer, it’s done in a way that I’d still class this as a contemporary read. It’s full of romance, high school angst, hanging with friends, fretting over possible futures. Basically, it was a lot of fun. I didn’t want this one to end. The fact that it was a standalone made saying goodbye to the final page even harder.

With dual point of views, the chapters alternate between next-door neighbours, a boy and a girl who used to be friends before hormones messed things up. I know the boy-next-door thing is clichéd, but it didn’t stop me enjoying this book one bit. I liked seeing the two of them go through bouts of not talking, then start to tolerate each other—at least for the sake of checking out their futures on Facebook. Those two huddled over a new Windows 95 computer, connecting via dial up, waiting for pictures to load slowly…it had me nostalgic for the 90’s. We may have things easier now, but it’s still sad that a lot of things we used to have were lost to progress.

The ‘future’ aspect of the book was a lot of fun, and personally, I kept finding myself wondering what their future selves would confuse, upset or excite them with on Facebook next. I cracked up more than a few times at some of the references thrown in there about things that didn’t exist in the 90’s and reading the characters reactions to them. The idea that you could change your future, even unwittingly, simply by knowing what was to come was an interesting concept that the book played upon. Once the characters started purposefully trying to change their futures, their romantic futures, I found myself hooked.

It was a bit whacky at times, but that was where the fun was. Trying to shape their lives into something better, yet never being satisfied. Overall, I liked the message it was sending, even if the main characters weren’t heeding it the majority of the time. It made them seem more real that way. Making mistakes, yet rationalising them, that can be the kind of thing that frustrates me about a character, but with these guys, I didn’t find them stupid, just angsty. There was one moment I found myself shaking my head at, but it appeared to have been there to show the character’s defiance towards being treated poorly, so I could forgive them for that.

Keeping the main characters’ friend count down helped the book, at least for me. Aside from the main guy and girl, there were only another two in their group. That made them easier to connect with—and easier to remember. I think it may have made me like the main characters more too—the fact that they weren’t this uber popular duo sprouting from the top of a pyramid of friends. They just came across as real, this group of four friends, trying to keep things together amidst all the obstacles. Closing the last pages, it was just a feel-good book in my opinion. I could definitely see myself reading it again in the future.

Recommended to:
Those after a book they can fly through…but one with heart. The Future of Us is a lot of fun.