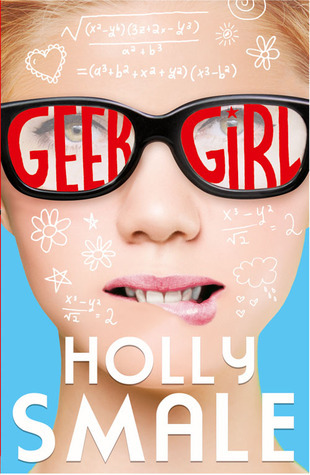 She knows that a cat has 32 muscles in each ear, a “jiffy” lasts 1/100th of a second, and the average person laughs 15 times per day. What she isn’t quite so sure about is why nobody at school seems to like her very much. So when she’s spotted by a top model agent, Harriet grabs the chance to reinvent herself. Even if it means stealing her Best Friend’s dream, incurring the wrath of her arch enemy Alexa, and repeatedly humiliating herself in front of the impossibly handsome supermodel Nick. Even if it means lying to the people she loves.

As Harriet veers from one couture disaster to the next with the help of her overly enthusiastic father and her uber-geeky stalker, Toby, she begins to realise that the world of fashion doesn’t seem to like her any more than the real world did.

And as her old life starts to fall apart, the question is: will Harriet be able to transform herself before she ruins everything?

Final Thoughts:
Prepared to be irritated by a know-it-all character, I went into Geek Girl on the defensive, but Harriet quickly broke me down and had me cracking up page after page. It was seriously freaking hilarious. I think it came from her inane way of blurting out the most random things at perfectly timed intervals, or sometimes constantly. While I may be more inclined towards sarcasm and drier wit, she was simply that hilarious that she even had me on board. Coupled with an abundance of heart, this was one book I just couldn’t let go of. Even during my first time sitting beside the pilot on my employer’s private plane yesterday, I had my head buried in this book rather than looking out the front of the cockpit. Harriet was just so much fun.

I’d heard that some had found her fact-spurting quality a little annoying, but honestly, I found it that good kind of quirky. And it wasn’t every page. It was used quite sparingly—in situations where she was nervous or a little out of place. She would say things she thought were relevant, feeling proud of herself, thinking people would be interested, or excited to learn something new, but then get weird looks. I’d probably be one those people giving those weird looks, but that’s my sarcastic side coming out to play.

For those looking for a helping of romance in their contemporaries, you won’t find it here. Sure, there’s a boy Harriet finds intriguing. But I’d put that down to the fact that we learn practically nothing about him throughout the entire book. He’s there at a few opportune moments, and then makes rapid disappearances before he and Harriet can do any real getting-to-know-you stuff. I think it may be a trilogy though, so things could develop more in Model Misfits (which I’ve already picked up and planning on reading straight away).

The whole intro to the modelling world really was out of nowhere for me. And I loved it. I mustn’t have read the blurb before I got into it because it just felt like ‘okay, she’s geeky and the bitchy girl hates her, cue high school drama’, then ‘whoa, we’re in Moscow at a fashion shoot’. Scouted/Spotted (whatever you want to call it) by a man with an overly flamboyant vocabulary, we met Wilbur. As far as characters go, he was perfection. I’d put his antics up there with Effie Trinket’s. He brought this humorous brevity to the modelling world, keeping me glued to see what cockeyed nickname he’d come up with for Harriet or her family next.

There’s just something wonderful about all of the characters, even the ones you want to hate. Plus, hating a character is a good thing—it means the writer did their job right. But aside from that, I want to acknowledge the parents. Harriet has a family, and they actually matter. She’s not off on her own, her mum and dad a mere sidenote. No, they’re involved in all of it. With a mother that died before Harriet was old enough to remember her, we met Harriet’s stepmum, Annabel, instead—and she’s not evil. She was kind of kickass, actually. Tough, but understanding, a real protector of her family, I believed that she loved Harriet regardless of something trivial like genetics.

And Harriet’s dad, I found him to be more of a teenager than Harriet herself. Which was awesome. Pulling hijinks together, I got to bond with him along with Harriet. And learn of his love for vodka. While Harriet’s journey may not have been complete by the end of the story, I felt like she’d definitely been on one. Her relationships were tested, her own image of herself was tested, things she thought were strengths, things she thought were weaknesses—all of it got mused upon as she went about her foray into modelling. A little escapist, yeah, but it still maintained a heartfelt sense of realism doused in hilarity.

Recommendation:
If you’re ready to laugh your butt off, pick this one up.