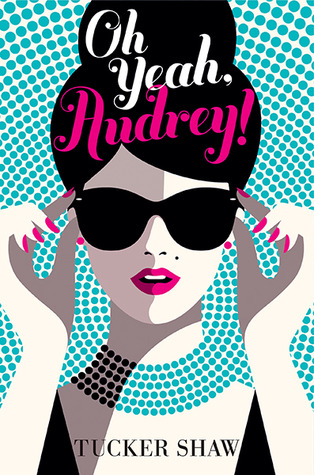 It’s 5:00 a.m. on Fifth Avenue, and 16-year-old Gemma Beasley is standing in front of Tiffany & Co. wearing the perfect black dress with her coffee in hand—just like Holly Golightly. As the cofounder of a successful Tumblr blog—Oh Yeah Audrey!—devoted to all things Audrey Hepburn, Gemma has traveled to New York in order to meet up with her fellow bloggers for the first time. She has meticulously planned out a 24-hour adventure in homage to Breakfast at Tiffany’s; however, her plans are derailed when a glamorous boy sweeps in and offers her the New York experience she’s always dreamed of. Gemma soon learns who her true friends are and that, sometimes, no matter where you go, you just end up finding yourself.

I must confess that, as an Audrey fan, I may have jumped into this book expecting too much. The idea of following Gemma and her friends on a Breakfast at Tiffany’s inspired tour of New York City sounded great; I expected a lot to come from this group of teens that share no more than one fan-base in common, and who are meeting in person for the first time. It took me longer to finish reading than it should have, however, and while Oh Yeah, Audrey! seemed to end on an emotional high note, the beginning and the middle could’ve been better.

Gemma was easy to like and get to know — which helps a lot, seeing that she is the only character we really get to know. There may be times where her decisions seem cliché and annoy the heck out of you (especially when she feels the need to explain every single Breakfast at Tiffany’s reference to the reader, as if we don’t know anything at all). On the other hand, when her mind catches up with her actions, I was able to empathise with her more as she struggled with her own identity following the recent death of her mother – I began to truly hope things would turn out okay for her.

One thing that worked against the book’s favour was the length of the story: the fact that it is compressed into a 24-hour Odyssey left absolutely no time for character development for anyone besides Gemma. The others, though considered Gemma’s ‘friends’, were no more than accessories to the dialogue and plot, which was really sad because they seemed to be really interesting people. Basically you could write a twitter post about each of them, and reach the same level of development they attain in the book. Nothing happens to them in the book either, they merely tag along, and speak or act when it suits. And that sort of reminds me . . .

Nothing notably interesting happens for the first half of the book. I read Oh Yeah, Audrey! on Kindle, and was completely gobsmacked when I looked down into the corner of the screen and saw ‘50%’, especially when so far they had arrived in town, met each other, had pancakes and tried on clothes before heading to a clothing auction. I wouldn’t say I disliked the first half, but I certainly felt like all those pages could’ve been put to better use.

When I finished the book, I was left uncertain as far as star-ratings were concerned. Oh Yeah, Audrey!, for the most of it, ended up being the sort of story I’d expect from a low-budget Disney straight-to-dvd release, but I can’t help feeling like the story’s ending deserves better than that. Everything that Gemma’s journey had been subtly working towards came together all at once, and it turned out to be the one ending I was really hoping for. I don’t know what to say when a book can drag you on for hours without impressing you at all, and then surprise you with a punch straight in the feels during the last five minutes.

Recommended to: fans of Gossip Girl and Disney Channel tv-movies . . . and Audrey Hepburn fans too, I suppose.