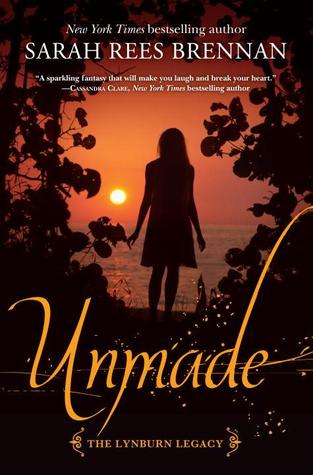 Powerful love comes with a price. Who will be the sacrifice?

Kami has lost the boy she loves, is tied to a boy she does not, and faces an enemy more powerful than ever before. With Jared missing for months and presumed dead, Kami must rely on her new magical link with Ash for the strength to face the evil spreading through her town.

Rob Lynburn is now the master of Sorry-in-the-Vale, and he demands a death. Kami will use every tool at her disposal to stop him. Together with Rusty, Angela, and Holly, she uncovers a secret that might be the key to saving the town. But with knowledge comes responsibility—and a painful choice. A choice that will risk not only Kami’s life, but also the lives of those she loves most.

Final Thoughts:
I don’t quite know how I feel about this series. It’s had its ups and downs, but has never quite managed to capture that same excitement I felt while reading Sarah’s previous series, The Demon’s Lexicon. Perhaps that was my problem going in. My expectations. I know that I took a lot longer to connect with these guys, but it did seem to happen somewhere during the second book. Kami was a thinker, she was funny, and she had a hero complex—all the makings of a good main character, but whether she lived or died, got the guy, or didn’t, it didn’t mean that much to me.

The plot, however, did get pretty good. Managing my way through a slow beginning, things suddenly shifted gears and took the story away from where I was expecting the 300+ pages to go. A big plus. Being the final book, confrontation was at the forefront, and the chapters just kept bringing more and obstacles each time I thought they may have solved things. Pacing, in that regard, was quite good—although, in terms of romance, I found that side lacking. I felt more invested in the ‘will they, won’t they’ romance of the LGBT side characters.

Powered by banter, it’s easy to get through the book without feeling like you’re lagging. I just wasn’t wowed to the point of recommending this series like I was with The Demon’s Lexicon. Kami’s dad and his constant misnaming of Lillian, the brusque head of the Lynburn family, was a fun reminder of what I liked about the second book. It also helped to lighten the mood this time with the otherwise dark prospects the characters were faced with.

It’s really hard trying to decide whether I liked the ending or not. It felt abrupt, mainly because the pages were disappearing but the plot wasn’t. I guess that’s a good thing. Giant epilogues can be a bore. However, the way in which it was resolved, perhaps that was where my qualm arose. I’ll leave that you to decide. It’s a good wrap up to the series, but just didn’t leave me gutted, floored and in awe like I was hoping it would.

Recommended to:
Fans of magical despair and teamwork.