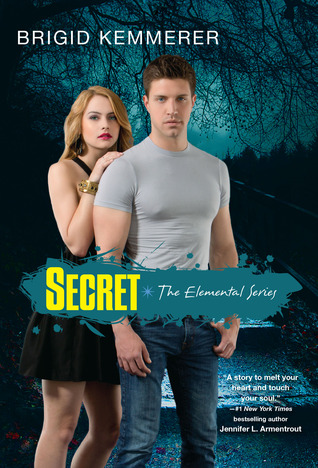 And then Quinn takes to hanging around his sworn enemy, and an Elemental Guide is counting the hours until he can try again to kill the Merrick brothers. Storms are brewing. On all sides.

Final Thoughts:
This series has me hooked. I’m dreading finishing it off, but I can’t wait to start Sacrifice. There’s just something about these characters and the way they interact that gets you so invested. I know I bitched about book two not advancing the plot, but I’ve changed my tune. When I realised the Elemental stuff wasn’t making much of an appearance again this time, I had already become engrossed in the characters that I didn’t care. So much happens with them in these three hundred or so pages that I can see how a paranormal plot heavy book could have torn away from all of the great revelations and personal growth that came through in this book.

Focussing on Nick, who was revealed to be gay in the novella, Breathless, that joined this book to Spirit, this became his coming out story, his turn to find someone. Being the first M/M relationship of the series, I found the change from the norm refreshing, but what I particularly liked this time around was the inclusion of two separate romances, not just flipping back and forth between the perspectives of the main couple. Nick’s love interest, Adam, brought something new and, I think, needed to the series. The two of them were sweet, but they definitely had their moments of excitement.

I went in expecting Quinn to end up out on the kerb once Nick got his gay on—and not too fazed by that—but Quinn’s story surprised me too. She’s yet another character I didn’t feel a whole lot for earlier in the series that I came to really enjoy. Her relationship with Tyler, one of the Merrick brothers’ longstanding enemies, seemed odd at first, I mean, he’s been a violent douche the majority of the series. He wasn’t suddenly perfect here either. There was just more to him. He had his owns issues, and so did Quinn. I guess all of the characters do, but these two seemed volatile, angsty, and well, somehow, they just worked.

Torn up over his identity, accepting himself, struggling to live up to everyone’s expectations of him, Nick’s internal warring tested his relationships with his brothers. With all of that heaving more angst into the mix, Nick’s struggles played against all of the joy his time with Adam was bringing him. I found that push and pull a real drawcard, keeping me turning the pages. I enjoyed Quinn, but I loved Nick’s perspective. It just felt like his story brought so much out not only him but everyone around him, that without it I wouldn’t have got to see these extra sides to the people I’ve spent four books with. But still, I wanted to see more of Michael. Bring on Sacrifice.

Recommended to:
Fans of the series. A great story of family and romance.