Jun
27
REVIEW: “It’s Not Me, It’s You,” Mhairi McFarlane
Posted in "Book Reviews" • Add Your Comment? 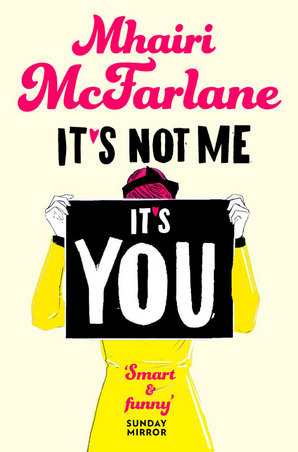 Delia Moss isn’t quite sure where she went wrong. When she proposed and discovered her boyfriend was sleeping with someone else – she thought it was her fault. When she realised life would never be the same again – she thought it was her fault. And when he wanted her back like nothing had changed – Delia started to wonder if perhaps she was not to blame…From Newcastle to London and back again, with dodgy jobs, eccentric bosses and annoyingly handsome journalists thrown in, Delia must find out where her old self went – and if she can ever get her back.

Final Thoughts:
I’ve come to crave Mhairi’s writing. Her characters are just so engaging. I’ve gotten to the point where I baulk at most books over 400 pages now, wondering if I have the time to commit to it, but not with this one. I lapped every page up, not wanting that feeling of belonging—the connection to these characters—to end. The world that she has created here was realistic, full of moments of hilarity, angst and tough decisions. Of course, it was a romance too, but I found it more a case of Delia’s journey to find out who she was again rather than attaching herself to the next man to come along.

It felt like so much was packed into the first hundred pages or so. The upheaval of Delia’s life came on so suddenly, piece by piece, things she had thought she could count of didn’t seem so stable any more. With all that happened, it could have been a movie. I was surprised by how much story there was left to tell. More and more kept happening, all of these side characters were introduced the further you got into the book, creating a much deeper world, and building on that realism I mentioned earlier.

Delia’s life wasn’t one of fantastical endeavours, but she did become embroiled in a quite a plot—scoring a job with an eccentric businessman, being blackmailed by another—all the while dealing with the emotional blackmail attempts of her ex. The interludes with her younger brother, her best friend from college, her new work-friend—even her dog—they helped to humanise the often-wacky escapades her boss was subjecting her to.

I have to mention the comic as well—Delia’s pet project from way back, the one she never had the confidence to anything with. We actually got to see snippets of it in between chapters every now and then. Although it was a superhero comic, I really liked how it tied into the situations Delia found herself in as the book progressed.

Oh, and the Naan. I couldn’t finish this without giving him a good mention. Delia’s online troll-turned-friend was probably one of the most intriguing aspects of the book. He was such an enigma for a chunk of the book that I would light up whenever he manage to work his way into a scene. The book may have been all about Delia, but I would happily read more about the adventures of the Naan.

Recommended to:
Contemporary fans who enjoy things British, funny and with a good caper.