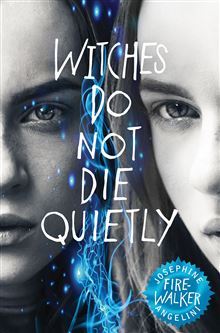 Lily Proctor has made it back to her own universe, and it’s finally time for her and Rowan to be happy and relax. True, she almost died in the Pyre that fueled their escape, and they must hide her new magic for the safety of the world, but compared to fighting the monstrous Woven and leading armies in the alternate Salem, life is looking good.

‘You think I’m a monster, but my choices, as ruthless as they seem, are justified.’

Unfortunately, Lillian, ruthless ruler of the 13 Cities, is not willing to let Lily go that easily. Lily is the closest version of herself she’s ever seen in all her worldwalking, and Lillian’s running out of time. If she can’t persuade Lily and Rowan to return to her world, she’ll have to find a way to make them come back.

Final Thoughts:
It had its good plot points, but the journey just didn’t feel worth it. I was never enthralled, and really, I just wanted to get to the end of it so I could start the book I was actually interested in reading. So what happened? I quite enjoyed Trial By Fire, but Firewalker, not so much. With the use of the contemporary and fantasy settings split pretty much in half, the ‘world-walking’ concept doesn’t really come into play much. The book was either set in one world or the other, giving the story two distinct arcs. I thought of them as the ‘training’ one and the ‘quest’. And I’m not one for quests, so that didn’t help things improve.

With the characters basically glued to the confines of Lily’s house for half the book, I found myself getting a little stir crazy, waiting for things to happen. The introduction of new characters from Lily’s own world, and their getting used to the witchy stuff took some time, but spending half the book learning magical concoctions and fighting skills—that was too much for me. I did enjoy all of the Lillian flashbacks scenes that were inserted throughout, though. I found this book really helped in getting to know Lillian’s motives and seeing her wicked actions of the first book in a different light. The plotting was obviously done quite well, with things linking into place and giving you those ‘ah, that’s why’ moments.

As things shifted back into the magical world, my interest levels perked back up. The walled cities, the threat of the Woven—animal monsters—and even the threat of the people she once trusted, all of that should have made for a fun second half of the book. Instead, I found it up and down from then on. Something big would happen, and then the characters would trek across the country losing people to the Woven. Some other revelation would come about, and then more walking, more death. More walking, more death. You get the idea. Long journey stories are not my thing. Yes, it showed the struggle of what they were doing, but it just made the pages drag for me. The ending was great, however, completely widening my perception of the world in which it’s set. It’s actually got me interested enough again to see where it’ll go next. But for now, I’m just happy to be done with this one.

Recommendation:
It’s an okay mid-trilogy book, and the world-building is well thought out. It just wasn’t the right book for me.