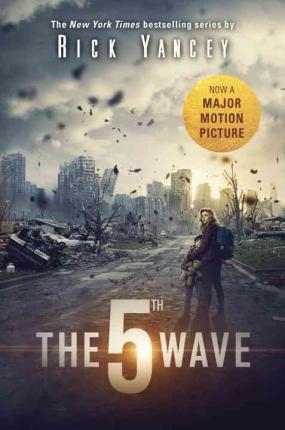 The 1st Wave took out half a million people.
The 2nd Wave put that number to shame.
The 3rd Wave lasted a little longer, twelve weeks… four billion dead.
In the 4th Wave, you can’t trust that people are still people.
And the 5th Wave? No one knows. But it’s coming.

On a lonely stretch of highway, Cassie runs. Runs from the beings that only look human, who have scattered Earth’s last survivors.
To stay alone is to stay alive, until she meets Evan Walker. Beguiling and mysterious, Evan may be her only hope.
Now Cassie must choose: between trust and despair, between defiance and surrender, between life and death.

Final Thoughts:
With the movie out already and this book having sat on my shelf unread for the past two (or is it three?) years, I knew it was time to pick this one up. Mainly because I hate trying to read a book after I’ve seen the movie and know all the twists. That being said, I am very much on the bandwagon now and can’t wait to check out the film. It threw us straight into the deep end, alone with our main character, Cassie, as she tried to navigate life in a world not exactly overrun by aliens, but a world where humanity had been all but extinguished.

The isolation was a little jarring at first, but I found it brought me into the story quicker than if we’d started back at the beginning of the invasion, watching society collapse. We do get glimpses into this though, shown through a bunch of interspersed flashbacks. It helps break up the lack of human interaction on Cassie’s part in the first chunk of the book. Broken up into Parts, perspectives change with each new one, alternating among the lives of a few different characters. Rest assured, though, the book doesn’t jump back and forth all over the place. The select few are actually pertinent to the plot, and eventually draw things together.

Things did tend to stall a little mid-way through the book with all of the chapters spent in the training camp, learning how to fight, etc. Yes, it introduced some new characters and becomes relevant towards the end, but it just didn’t feel as exciting as some of the other things going on around them. I wanted alien action and threatening encounters, not target practice. But hey, the way the book’s set out, with the black pages standing out in between each of the Parts, it gave me the motivation to carry on to the next one in anticipation of a POV switch.

The romance. Oh, the romance. I didn’t actually hate it. I know, shocker for me, right? The end of the world going on around them, the close quarters, the lack of alternatives—feelings were inevitable, but the thing was, I believed it. It wasn’t just the usual attractive person comes along, offers girl a smile and she’s his. Sure, he was attractive, and like smiling, but there was more to it. There was a bond, one that you could see starting to form, one that went both ways. And that sold me on it.

I wasn’t exactly sold on some of the ideas behind the aliens’ grand scheme that came about towards the end, with things seeming just a bit too convenient plot-wise. Still, the ideas behind the invasion and all of the world building that came from it really put some of the other alien-centric fiction to shame. The whole ‘banding together after the apocalypse, roaming around looking for a new place to settle’ storyline gets boring when it’s told over and over. Here, anyone can be the enemy, which isolates people, making trust a luxury—and with that, the people become more interesting.

Recommended to:
Anyone after a bit of gunfire, romance and deep thinking amidst an action packed alien invasion.