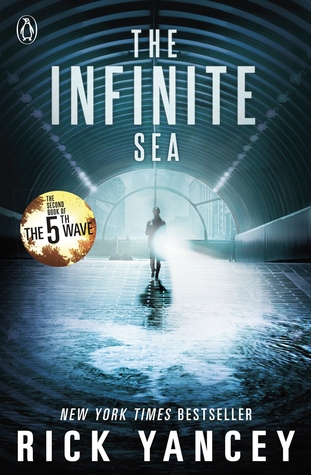 How do you rid the Earth of seven billion humans? Rid the humans of their humanity.

Surviving the first four waves was nearly impossible. Now Cassie Sullivan finds herself in a new world, a world in which the fundamental trust that binds us together is gone. As the 5th Wave rolls across the landscape, Cassie, Ben, and Ringer are forced to confront the Others’ ultimate goal: the extermination of the human race.

Cassie and her friends haven’t seen the depths to which the Others will sink, nor have the Others seen the heights to which humanity will rise, in the ultimate battle between life and death, hope and despair, love and hate.

Final Thoughts:
The first book sucked me in with all of the action and intrigue, but this one just felt like a slog to get through, with nothing really happening on the invasion front for the first half. The second half, however—amazing! Secrets were being revealed, plenty of strategizing, mental and physical torment, plus there were twists galore. I really felt like we got to know Ringer a whole lot better in this instalment. But coming out of this book, it left me wondering where the movie plucked its perception of Ringer from. She is such a better character here—much more complex.

With only minimal time spent in Cassie’s head this time around, it’s a bit of a deviation from where we were last time. There was such a build-up of Cassie’s personal life, her struggles, her strength, yet here it felt like she was more of a background character. So in turn, there’s a lot less time focussed on the Evan Walker romance, which some might appreciate. I enjoyed their relationship in the book, but thought the movie took the cheese-factor way too far. Here, we’re lucky to get the two of them in the same room for very long, let alone witness any long proclamations of love.

With the first half of the book pretty much set in the one location, I felt my interest wane. It felt like Ben/Zombie’s character went nowhere after having quite a bit of a focus last time. He was there to argue with and give orders to the rest of his team, but that was about it. Perhaps after having such a Ringer-centric book this time things will switch and he’ll take focus in the finale. Although, having switched over to Team Ringer, I’d be happy for her to take on the alien baddies herself next time around.

I don’t know what it is about the writing here, but I’ve found the solitary or one-on-one scenes to be a lot more enjoyable than the others—particularly the ones with Ringer. Her character really internalises a lot, letting us get to her both her strengths and her weaknesses. Some of the best scenes of the book revolve around her on her own as she contemplates her next move. It’s hard to really discuss it without giving anything away. Just give this a go and don’t let the first half of the book put you off if you find it a bit slow.

Recommended to:
Survival drama and conspiracies.