Aug
06
REVIEW: “After You,” Jojo Moyes
Posted in "Book Reviews" • Add Your Comment? 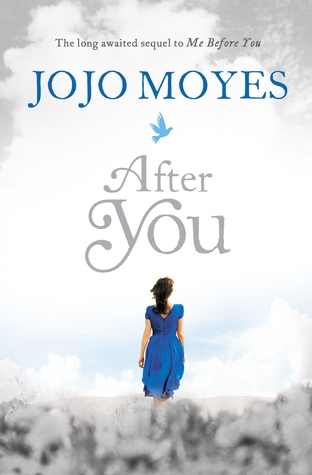 Title: After You (Me Before You #2)
Author: Jojo Moyes
Published: September, 2015 by Michael Joseph
Pages: 407
Rating:

Louisa Clark is no longer just an ordinary girl living an ordinary life. After the six months spent with Will Traynor, she is struggling without him. And when an extraordinary accident forces Lou to return home to her family, she can’t help but feel she’s right back where she started.

In a church basement, with the motley crew of the support group Moving On, Lou attempts to kick-start her life again. And when she meets strong, capable Sam Fielding things seem like they are going in the right direction. This is until a figure from Will’s past appears out of the blue . . .

Final Thoughts:
I went into this expecting too much. Or something different. I’m not quite sure. It IS about Louisa moving on with her life, but much of the book is taken up, or rather, derailed, by Lily, a teenage daughter of Will’s, unbeknownst to him at the time of his suicide. And yes, that gets brought up, throwing around blame, that the knowledge of her existence could have possibly changed his mindset. The book really comes across as the Lily story, with Lou on the outside, having the occasional life problem of her own as she tries to bend to Lily’s whims. This is pretty much where my problem with the book lies.

Set a couple years after the last book, Lou’s family don’t play as big a part this time, but they do pop up from time to time. Treena, Lou’s younger sister, seemed toned down having less arguments (and the one’s she did have, she was generally in the right), but her parents had plenty of rambunctious antics, perhaps more so than last time. Her mum seemed to have a feminist awakening, much her dad’s utter shock. I think their plot was once of the more endearing of the book, bringing us a bit of familiarity in the thrum of new character plots going on.

Now working in an airport bar, Lou’s life felt so stagnant, like she had given up on trying to move on. The job involved a skimpy outfit and green wig, and a slavedriver boss…enough said. Spending her free time attending a ‘moving on’ group, Lou meets some people with similar feelings of loss, but this sits more in the background. We do hear a bit from each of the characters attending the group, but I’d be hard pressed to remember much of it. It does lead to Lou starting a ‘thing’ with a paramedic, though.

It was hard to know whether things were headed in a romantic direction, or if she was just after sex. I never really felt one hundred percent on board with her new guy. The relationship build-up was just so jagged. She spends most of her time wondering about Will, and if she’s doing the right thing in regards to his daughter. I wanted to be addicted to this story, but the pull just wasn’t there. I didn’t like the daughter—yes, she had problems, but Louisa basically destroys her own life to save this girl’s. With everyone around her telling Lou to look after herself, it was just so frustrating.

Still, the last quarter of the book did get me back on board and bring in all of the warm and fuzzy moments I had been hoping for, it just wasn’t as fun a ride in getting there. In Me Before You, while Will may have had his moments of grumpiness in the beginning, you could still feel the connection building and enjoy the building of the romance. Here, it just didn’t have the right pacing throughout to maintain the spark.

Recommended to:
Those who would like a bit more from Lou and her family.