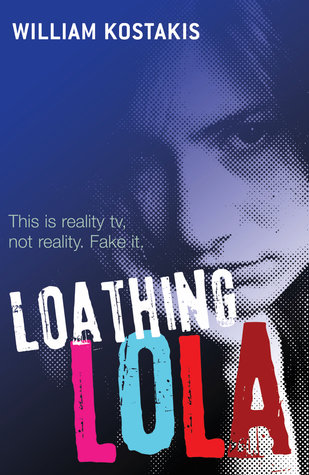 Fifteen-year-old Courtney Marlow didn’t exactly think it through. She thought the offer to have her life broadcast on national television was the perfect solution to her family’s financial troubles.

Mackenzie Dahl, the show’s producer, promised to show Australia a real teenager. Courtney was going to be a positive role model, someone on television without a boob job and an eating disorder.

Soon, everyone wants their 15 minutes of fame via a little bit of Courtney – especially her conniving friend Katie, and her stepmother, Lola. And Courtney is just beginning to realise that ‘ordinary’ does not translate to ‘entertaining’…

Final Thoughts:
Perhaps having read Will’s later published books first left me at a disadvantage going in to this. It was hard not to compare the differences and notice how much he has grown since this book. Loathing Lola, while not feeling as polished, did still have a fun plot. It was kind of like Degrassi in its tone, along with the high school setting taking the forefront, but very much Australian. Had we gotten to know the characters a bit better, to see what made them tick, I think I would have enjoyed it more. Although, taking it for what it was, it had more than enough humour and angst to keep me turning the pages.

Main character, Courtney, was a bit hard to take at times. Her boyfriend had just died, but the grief seemed to be buried within the beginning chapters to make way for the reality tv show plot—and a new love interest. It left her coming across bland. I didn’t feel as if I knew her, and only really felt connected to her because she was pushing the plot along (or being pushed by it). Her friend, Katie, left more of an impression, though not a particularly good one.

Katie, quirky, obnoxious friend. That was basically her. With no filter, this girl made things interesting, but she was annoying. The friendship between her and Courtney felt strained to the point that it was difficult to picture how they could make it work. I would have liked to have seen more in this respect, and learned why Katie was like this. It all just came across as character-lite. Especially so, in regards to Katie’s twin, Tim—Courtney’s actual best friend. We learn that there’s no romance between them, that they’re purely platonic friends, which is fine, but he just feels like he’s hovering on the outside of her life, making the occasional appearance. I wanted to know MORE.

Real Teens, the reality show set within the book, gets more than enough of the page time. With camera crews following Courtney around, it seemed like every moment was filled with another scheme by the production company, trying to concoct something out of nothing. Sure, this kind of plot was out of the box, and I enjoyed it, but without the character depth to back it up, I couldn’t emotionally connect to the point that would have gotten this across the line for me.

Recommendation:
I’d still recommend people give this a go, it has its moments, but it’s not a favourite for me.