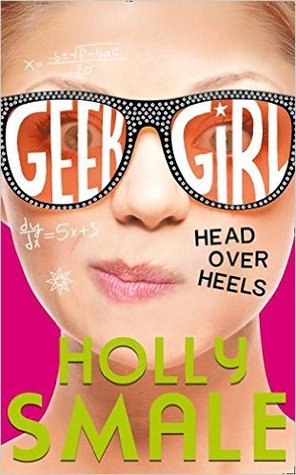 Fourteen squirrels were once detained as spies.
Snakes and Ladders and Chess were both invented in the same county.
Astronauts’ hearts become rounder in space.

And for once, she knows exactly how her life should go. If only everyone else would stick to the plan…

Final Thoughts:
It’s always fun coming back to this series and the familiarity of it. There’s always some sort of drama going on, but it manages to maintain its underlying feel good vibe. It’s about modelling, but it’s not. The characters are what shine through here—and Harriet’s personality certainly does. I don’t think I could stomach Harriet in real life, but she’s amusing to read. Not always as smart as she thinks she is, Harriet can grate on your nerves with how clueless she can be. I had moments where I wanted to tell her what was going on, to think of others, but her big personality pushes through and tells the reader not to worry about things like that.

So while I really enjoyed my time with this one, I think the difficulty in connecting with the main characters does let it down. While Harriet has grown over the course of the series, she still has a way to go. Occasionally she realises her mistakes, but I feel like she just tells the audience she’s learnt her lesson rather than actually learning it. Acting like she’s suddenly a better person, she seems to find a way to rationalise her behaviour and move on only to do something similar later. She does it in a way that tries to make her actions seem cute, but it just seems fake which irks me a bit.

Getting past my irritations with Harriet, I have to say that the amusing situations and international modelling expeditions do keep you entertained though. Her agent, Wilbur, wasn’t as exuberantly cheery, but the plot called for that this time around. I found the descriptions of the hectic roads of India to be one of the best aspects of the book. I haven’t been there, and have no idea if it was factual, but it really made me feel like I was trapped there fearing for my life along with Harriet.

With her ex-boyfriend, Nick, shoved into a mental box, Harriet’s life seems to revolve around her new group of friends. And that group has a name: Team JINTH. Combining their initials, Harriet really goes overboard trying to micromanage their friendships. Creating her own JINTH stationery, JINTH banners…JINTH clothing. Yes, she pretty much leaps into crazy town. Yes, I could understand her in a way, not wanting to be left out, to be ditched, but her way of going about it did kind of leave you staring wide eyed at times.

I guess the main thing is that her heart is in the right place, or at least she thinks it is. The fact that these books are able to get you thinking like this is enough to prove they’re worth reading. I may get annoyed with Harriet, but I don’t think I’ve ever been bored. I always seem to fly through these books, plus I’m already wondering how long a wait it will be before I can get to the next book. I would like them to end though, or at least have an end point in sight. As it stands, it feels like these books could go on indefinitely, or until she finishes high school.

Recommended to:
Anyone wanting a light and easy contemporary with a bit of friendship drama thrown in.