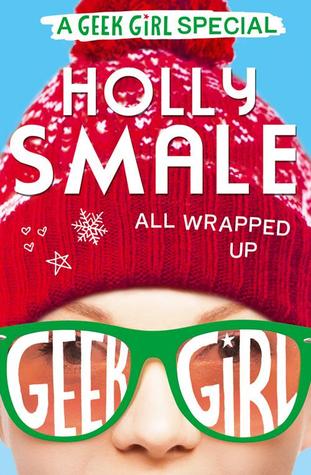 She knows that every year Santa climbs down 91.8 million chimneys.

She knows that Rudolph the red-nosed reindeer was almost definitely a girl.

She knows that the first artificial Christmas trees were made out of goose feathers.

But this Christmas is extra special for Harriet, because four days ago she had her First Ever Kiss.

Final Thoughts:
Harriet is addicted to Christmas—that’s pretty much what this novella tells you from the get go. There’s even a gift receiver’s checklist included for rating Harriet’s Christmas gifting prowess. I’d missed that kind of wackiness as it seems to have dissipated in the later books. Still, it was weird stepping back in time, trying to remember where everybody was at. Set earlier in the series, Harriet is enthralled with her Aussie model boyfriend, Nick, waiting to hear from him about their first date. If you ship Nick/Harriet, you will eat this up. I’m not their biggest supporter, but even I enjoyed this.

It’s cute, and has some fun scenes between Harriet and her bestie, Nat, her parents, and even her modelling agent, Wilbur. If you’re a fan of the series like me, you’ll be mentally checking each person off as they make their cameo appearances. It stirs quite heavily towards the romance in this short, leaving no time for any modelling adventures, although that’s probably a good thing. It would have felt too rushed. While there may not have been a lot of meat to this story, it was enjoyable enough to tide me over until the final book comes out.