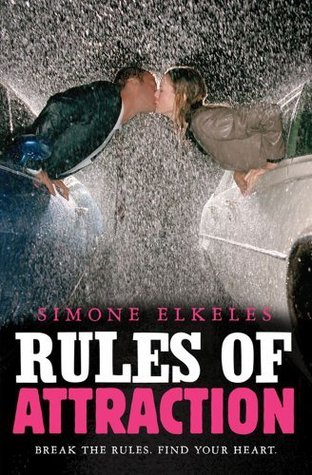 Carlos Fuentes isn’t happy about leaving Mexico to start the “new” life his older Brother, Alex, has planned for him. Carlos like his freedom; living life on the edge and carving out his own path – just like Alex did.

Kiara Westford doesn’t talk much; preferring instead to shut the world out. And when Carlos bounds into her life she struggles to understand him and his wild ways. Carlos is sure that Kiara thinks she’s too good for him, which is just fine because he’s not interested anyway, right? But when they finally open up to each other, the connection they feel shocks them both. Can they overcome their fears and realize that sometimes opposites really do attract?

Final Thoughts:
Much like Perfect Chemistry, I couldn’t get enough of this one. Rules of Engagement is so similar in tone, but does so without feeling like a rehash of the first book. A couple of years have passed, and now we’re focusing on Alex’s younger brother, Carlos and his love interest, Kiara. I think I found these two even more enjoyable than Brittany and Alex (who make plenty of cameos)—there’s less gang stuff this time around and more of a focus on the romance and snark.

Carlos did come across sexist at times, and reading his dialogue aloud to someone else did make them question what I was reading. I think within the context, the things he was saying were meant to be swoon-inducing, and while I did find them to be most of the time, sometimes I’d even think, ‘no, you can’t be serious’. He did try to portray a tough persona, but it was clear early on that he was a caring guy, he just had a sharp tongue.

Kiara, alternatively, referred to herself as having a thick tongue, falling into bouts of stuttering whenever she got nervous. She’d get incredibly self-conscious, her classmates frequently laughing at her for it. Seeing it happen as often as it did, I was a bit dubious if it was just inserted randomly or actually in tune with her character’s feelings. Still, it happens to me sometimes, so I could sympathise with her. You think you know what you’re going to say, but then your mouth gets stuck on a word and then rest of what you were going to say just evaporates, and what you do end up saying sounds like a mess.

I was happy to see Kiara had been given a best friend who happened to be gay. Tuck was fun and supportive, at times, quirky, yet seemed like he had her back as well. It didn’t hurt that he pushed Carlos’ buttons too.

There wasn’t a whole lot of plot to speak of, with more of the book spent getting us from the main two as forced acquaintances to, well, much more than that. The gang-related drama does keep the tension up, though, but like I said, it doesn’t overpower the story, acting as more of a background focus, weighing on Carlos’ mind.

The way Kiara’s family were involved in the story felt very genuine, even if they were quite unusual parents. I really liked seeing a loving, stable family for once—both parents present, not off working night shifts or prematurely in the grave. It gave a sense of boundaries for the characters, though they were much more lax in comparison to the rules of my own teenage years. Midnight curfews—what do these teens have to do? If I’m up after midnight, I’m counting the hours I’ve got left to sleep before my 5am alarm goes off and I have to dredge myself up for work.

Having dusted this one off in only a few lunch breaks, I felt like I couldn’t get enough. I’m hoping Luis’ story will keep me just as hooked next time.

Recommended to:
Others wanting to lose themselves in a romance.