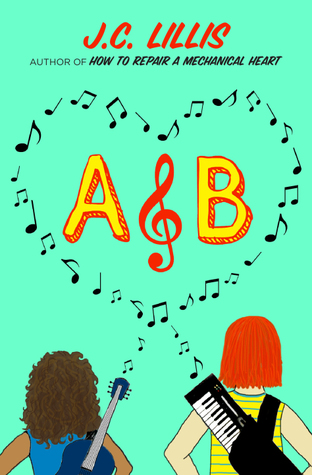 Eighteen-year-old Barrie Krumholtz is a super-tall optimist hell-bent on a single goal: securing a slot on Pop University, a reality show for singer-songwriters helmed by her #1 musical idol. When she humiliates herself on national TV and loses a spot in the finals to smug balladeer Ava Alvarez, the door to Barrie’s well-hidden dark side swings open. Never a quitter, she uses her bitter envy of Ava to shape a bold new artistic direction, and people love it. But when Ava ropes her into a secret collaboration, it sparks feelings neither girl expected—feelings that might threaten their creative identities and distract them from their professional goals.

Can love and ambition live side by side? Is happiness an art-killer? They’ll figure it out with the help of a blue guitar named Fernando, a keyboard named Rosalinda, and a few new friends who feel like home.

(Rated R for Rivalry, Romance, and Really Neat Subplot featuring Brandon and Abel from HOW TO REPAIR A MECHANICAL HEART.)

Final Thoughts:
Being the companion to my much loved, and favourite book read this year, How To Repair A Mechanical Heart, I’m probably going to judge this one harsher than if it were a standalone. Barrie and Ava were great characters, but fresh off the first book, my heart still lies with Brandon and Abel. Luckily for me, they did more than just cameo briefly—they got their own subplot! A decade has passed and the guys are now my age, so seeing where their lives had taken them was heaps of fun. But the heart of the story lies with Barrie, and her jealousy/humungous crush on the reality show contestant that knocked her out of competing in Pop University, Ava.

Whereas the first book centred on a love of fandom, this one throws us on the other side, with our main characters dealing with the prospect of it themselves. Still, our narrator, Barrie is OBSESSED with a one of the show’s judges, Tera, giving us that nerdy, fangirl insight. As soon as I realised this book would so full of music, I think I got hooked. There are a lot of references, but not to the point of pop culture overload. I appreciated more of the use of made up ones, adding to the world of the book. Part of what I loved last time was the creation of tv show, Castaway Planet, which gets more than a few mentions this time around.

What I found interesting was the way the book’s plot kept the main characters separated for a good chunk of it, despite something blossoming between them. It was a cool way of doing it, using text messages and secret phone calls. Doing this, allowed time to see a whole lot more of Brandon and Abel than I was expecting—Abel, in particular. At times I felt like they came off as older than the ages they were meant to be, calling Barrie ‘love’ etc. I’m 27, and I’d never do that. It’s more something that I’d expect someone in their 40s or 50s to say. Also, I would have liked to learn more about Brandon’s family and where they were at—his older sister, Nat, especially, but alas, it didn’t happen. I realise it wasn’t their book, but with the introduction of some new side characters that weren’t very memorable, I felt a little let down in comparison to their marvellous story.

But in terms of Barrie’s story, I was smitten. She was complex, dealing with the lack of love from her hardened mother, the infatuation with the memory of the deceased father she never knew, and her new-found feelings towards Ava against the desire to let out her bottled-up envy through music. Watching her transform as the pages went on kept me reading this every spare moment I could get. She had a lot of ambition trapped inside the guise of EVIL BARRIE, her alter ego whispering all the thoughts she didn’t want to let herself set free. It was sort of like Brandon’s ‘Father Mike’ voice in his head, but less intrusive. Plus, I kind of liked her evil persona.

Recommended to:
Fans of romantic angst, will love this. But do yourself a favour and jump of How To Repair a Mechanical Heart first and enjoy some slashfic and fanboy goodness.