Dec
13
REVIEW: “Anything Could Happen,” Will Walton
Posted in "Book Reviews" • Add Your Comment? 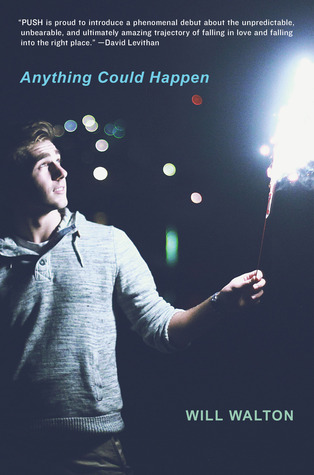 Title: Anything Could Happen
Author: Will Walton
Published: May, 2015 by Push
Pages: 288
Rating:

Tretch lives in a very small town where everybody’s in everybody else’s business. Which makes it hard for him to be in love with his straight best friend. For his part, Matt is completely oblivious to the way Tretch feels — and Tretch can’t tell whether that makes it better or worse.

The problem with living a lie is that the lie can slowly become your life. For Tretch, the problem isn’t just with Matt. His family has no idea who he really is and what he’s really thinking. The girl at the local bookstore has no clue how off-base her crush on him is. And the guy at school who’s a thorn in Tretch’s side doesn’t realize how close to the truth he’s hitting.

Tretch has spent a lot of time dancing alone in his room, but now he’s got to step outside his comfort zone and into the wider world. Because like love, a true self can rarely be contained.

Final Thoughts:
Having tried starting another book and failing to have it hold my attention, I switched it out for this one and found myself basically unable to function. I had to read this book. I haven’t switched on my TV since I started this one—that’s how much I needed to keep reading it. Tretch—while he may have had a weird name, he was very easy to sympathise with and cheer for. His plight may not have been anything ground breaking, but it reeled you in with its loveable characters and kept you wanting the best for them. Finding a YA book with a good coming out story 10 years back when I was a teenager was next to impossible, so it makes me happier to know that books like this one are out there now.

It’s not hard to see how much the author loves his Taylor Swift and Ellie Goulding, and well, pop music in general. It shines through in main character, Tretch. The title of the book, drawn from the song, gets referenced repeatedly. It feeds into the plot, but does get a bit tiring when pop culture is mentioned over and over—especially when it’s the same pop culture references being made. Still, knowing myself at 15, I could be more than a little obsessed with a song too. What I did enjoy about the music references were how they connected Tretch and his older brother, Joe. They didn’t seem like the closest of siblings, but there was good vibe there that helped show a sense of stability in Tretch’s life.

When it came to his friends, there was, well, only one—Matt. Trecth’s obsession. Tretch would get excited at the mere mention of Matt, and any attention Matt would show him widened that excitement exponentially. It was bittersweet in a way, Matt being straight, and Tretch unable to work up the nerve to out himself for fear of changing their friendship/the potential relationship in his mind. I was on the fence between wanting them to get together and Tretch to find someone else to reciprocate those feelings he was having.

The chunk of the book spent at his grandparents’ farm, repeatedly dubbed the Farm Farm (as his surname happens to be Farm), was probably the weaker portion as it drew us away from the plot, introducing new family issues. I didn’t find them boring, but it just came across as, ‘it’s Christmas! Let’s give Matt a break, and meet the family’. The events that happened here could have introduced some drama and angst, but they were brushed off too quickly once Matt was brought back into the picture.

A lot seemed to be left open in the end. Things I had been waiting for didn’t seem to eventuate, so it just felt like the depth wasn’t quite reached. It was satisfactory enough, but a sequel from another person’s perspective could just as easily fit in here and show us what comes next, and maybe a bit more of the characters’ struggles. Although I flew through this one, really enjoying my time spent with this book, there are others that still hold that special place with me a bit more than this one.

Recommended to:
Anyone looking for a light, gay YA to dive into.