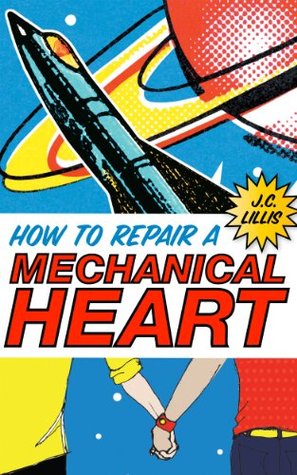 Final Thoughts:
So, this was fanficcing-tastisc. Aside from, maybe, Fangirl, I’ve never seen so much fanfic love in a book. And here, both the main characters were gay! It had me gripped in the best possible way. I should lament—but I’m won’t—the poor disintegrating Sunday that met its demise when I started and finished this book that day. With so much to love about this book, from the cross-country convention road trip, flirting, internal warring over a religious upbringing, the geeking out and more flirting, I can’t help but want to recommend this book. I don’t want to let go of these characters—Brandon and Abel (and Bec) forever.

Now that I’m done, I feel like I should have paced myself a bit, allowing myself more time to enjoy what this book had to offer. Brandon, having just finished high school and recently out to his very catholic parents, was a great narrator. I found him so very interesting, watching the evolution of his mind and heart. Caught between who he wants to be and who he thinks the church wants him to be, we get these snippets written like a conversation in his head of what his church’s priest, Father Mike, would say whenever he gets into any gay-ish situations. Having been raised without any such upbringing, I found these moments anguishing to read, but also very enlightening. Having a catholic boyfriend myself, I’d love for him to read this book and let me know how accurate these little bits actually seem to him.

With a fictional tv show set within the world of this book, reading snippets of fanfic based on that show could seem like a bit too much, but for me, this just heightened the experience. Cadmus and Sim, Castaway Planet’s leading male characters, were being shipped as Cad-Sim, much to Brandon and Abel’s disapproval. MASSIVE fans of the show, their vehement insistence that nothing was going on between these characters in canon led to tonnes of hilarity as they battled via their vlog with the fangirls shipping them. I grew to love this ship, meanwhile shipping the book’s own characters at the same time. It was weird, but a lot of fun.

For someone who usually can’t stand road trip stories, it was surprisingly easy to get into. Plus, their motives for going on the trip—to prove the slash fangirls wrong—made their antics that much more hilarious. With such witty dialogue, it made you want to live inside the pages. I think it helped having a cohesive bunch of characters that we got to know well rather than adding and dropping people at each stop. Although the celebrities attending each convention did change, they varied in personalities quite a bit, giving them depth—separate from their in-show personalities. I was pretty much wowed by how much detail went into the characters of this book. Even Brandon’s best friend, Bec, got a love interest that followed them on from stop to stop. Focusing more on the characters’ lives than their surroundings, I found myself getting quite attached to them and all their issues.

There is a fair bit of angst here, not just in Brandon’s struggles, but in Abel too. There are plenty of punches that knock your emotions about and make you want to hug these guys, or talk some sense into them. Seeing Bec stuck in the middle of it all made me feel all the more for her, reminding me just how good of a friend she was. The guys put her through a lot. It wasn’t one big downer though, there were more than enough squee moments, including Brandon and Abel mischievously playing up a fake relationship to stir the fangirls. But gah, watching the genuine feelings build, that was what got me. I felt like a fanboy myself, hoping like crazy the main characters could sort out their drama before the pages ran out. This book was life to me. I want there to be more, but the way it ended—I could read that page over and over again.

Recommended to:
Fanboys and fangirls alike.