May
23
REVIEW: “How Not To Fall In Love, Actually,” Catherine Bennetto
Posted in "Book Reviews" • Add Your Comment? 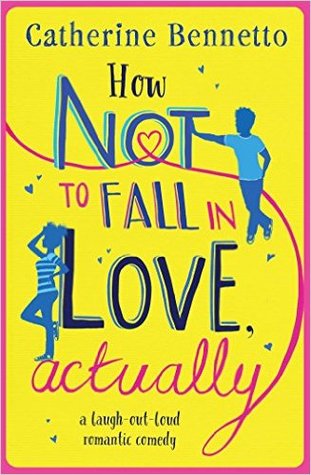 Emma has a job in television which is distinctly less glamourous and exciting than it sounds. She’s managed to claw her way up the ranks from Tea-Maker and Rubbish-Collector to 2nd Assistant Director (heavy on the ‘assistant’. Even heavier on the ‘2nd’).

Luckily she’s also accidentally the heir to a lovely cottage in Wimbledon, with a crazy Rottweiler-owning octogenarian as a neighbour and a rather sexy boy as an accidental tenant. But this baby is coming whether she likes it or not, and she needs to become the sort of person who can look after herself let alone another human being – and quickly.

Final Thoughts:
Oh, this book cracked me up so much. With such strong personalities, these characters lit up the pages. It was hard not to love even the annoying people as their idiosyncrasies brought Emma’s disastrous world to life. Pregnant, broke and getting nowhere in life, Emma’s up shit creek, but watching her wade her way through it was just so heart-warmingly awkward and fun.

Her pregnancy takes backseat to the heightened drama going on around her. She doesn’t forget she’s ‘with child’, but it’s not the only thing in her life. Her mum is quite…opinionated—and with a lack of filter, her words often left me wondering ‘where can I find this woman’, and possibly ‘how do I avoid her’.

Ditching the father of her child, her job, and shacking back up with her family, it felt like a do-over in Emma’s life except that she had a baby on the way—and no drive to do anything. From lazing about the house, to the occasional hang out with her friends, not a lot was happening in her life.

And then it was.

Bequeathed a cottage, a frustratingly amusing older neighbour and a middle of the night drunk on her doorstep—Emma’s life was alive. Things were happening beforehand, but this is where it took it up a notch. Harriet, with her peeping tom video camera and megaphone, creates a humorous ruckus in Emma’s life. All of the characters spark life from the pages, but Harriet was something extra—far-fetched and real at the same time.

As the pregnancy progressed and the months went by, I felt like I was experiencing all of the emotions of someone attached yet detached from it all. She comments that she doesn’t feel like it’s real, just getting on with her life as her body (and nipples) expand.

Surprisingly, the book takes a bit of a detour, sending us away from the bulk of the pre-established characters for a much needed source of income for Emma. It was fun and added some character development for Emma, but basically all of the characters met during this ‘job’ are left behind as soon as Emma gets back to her family and friends. I would have loved the choccy stuffing shagger ‘Martha’ to at least have made another appearance near the end as a tie back. With five hundred pages, there was time.

But then again, the romance did take a while to spark. For a time it seemed as if it had been forgotten, or at least, hidden very well. The slow burn approach is satisfying, and there were enough cute and endearing moments throughout to keep you going, but sometimes you do want a good squee fest. Luckily Emma had oodles of spunk dripping from her sharp tongue that I couldn’t let go of this one long enough to feel like I was missing anything. I went as far as reading it aloud on a two hour car ride with my boyfriend, because he was wondering what had me bursting into laughter so much.

Recommended to:
Those after a lot laughs. I just freaking loved Emma and this book.