Jun
15
REVIEW: “History Is All You Left Me,” Adam Silvera
Posted in "Book Reviews" • One Comment 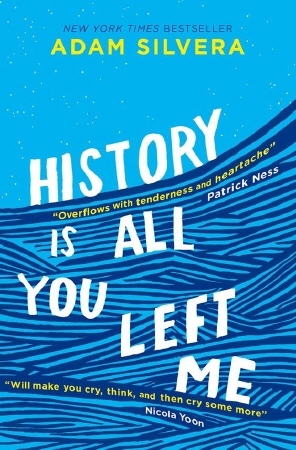 With chapters alternating back and forth between the past and the present, I struggled initially trying to find a balance. Having something interesting begin to happen in one time period, then being sent back to the other became frustrating. I would have preferred if the ‘history’ chapters were spaced randomly so you didn’t know when to expect one.

Watching Griffin and Theo’s relationship begin had its sweet moments—but it seemed like there so much sex in this book. It wasn’t particularly visual, but still, these guys got it on a lot more often than I was expecting. However, it did add to the dynamics throughout the story.

Griffin’s OCD plays a big part in the formation of his character—which I liked. I’m enjoying the way mental illness is being brought to the forefront more often now. Having my own OCD issues, I found it easy to relate to some of the things Griffin does and appreciate the struggle he goes through just functioning. But with Griffin being pretty much obsessed with Theo, it felt like there was a dependence in their relationship, Griffin using Theo as a crutch to handle his OCD. I didn’t like the way he was merely mollified rather than trying to help with his issues. Griffin’s fixation on avoiding odd numbers and walking on people’s lefts really hindered his life, but Theo seemed to let Griffin get away with it rather than making an effort to help him.

After Theo moved away and their relationship faded, Theo’s new boyfriend, Jackson, appeared, creating an obstacle in Griffin’s master plan for him and Theo to reunite. The disdain was real. Jackson and Griffin seemed like an impossible pairing. But with Theo’s death starting the book, Jackson became Griffin’s only link to Theo’s new life—the two of them using each other for comfort. I think this is where the book got better for me. The two worlds of Theo’s colliding created something interesting and allowed us to feel like Griffin had found an outlet for his grief. I wasn’t completely on board with all of his actions, though. Griffin comes off as quite a user, not really thinking of others, or if he is, not caring.

Inserting a twist towards the end gave me a smile, especially needed after a slog through the depressing bits. Still, I wouldn’t say I loved the way things played out. Believable, yes, but it leaves you just a bit empty. At one point I was hoping for a paranormal or hallucinogenic episode leading to an ethereal appearance from Theo, but no such luck. With only reality to greet me, I felt like I needed a pick me up book to get me excited about life again.

Recommended to:
People wanting a book that’ll make you smile, but stomp all over your insides at the same time.