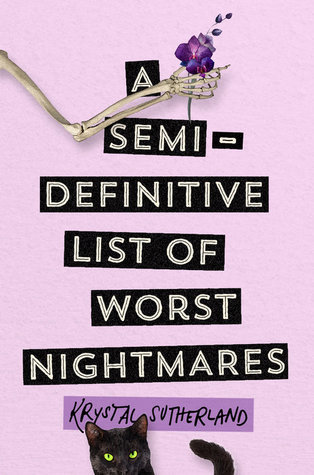 Ever since Esther Solar’s grandfather was cursed by Death, everyone in her family has been doomed to suffer one great fear in their lifetime. Esther’s father is agoraphobic and hasn’t left the basement in six years, her twin brother can t be in the dark without a light on, and her mother is terrified of bad luck.

The Solars are consumed by their fears and, according to the legend of the curse, destined to die from them.

Esther doesn’t know what her great fear is yet (nor does she want to), a feat achieved by avoiding pretty much everything. Elevators, small spaces, and crowds are all off-limits. So are haircuts, spiders, dolls, mirrors and three dozen other phobias she keeps a record of in her semi-definitive list of worst nightmares.

Then Esther is pickpocketed by Jonah Smallwood, an old elementary school classmate. Along with her phone, money and a fruit roll-up she d been saving, Jonah also steals her list of fears. Despite the theft, Esther and Jonah become friends, and he sets a challenge for them: in an effort to break the curse that has crippled her family, they will meet every Sunday of senior year to work their way through the list, facing one terrifying fear at a time, including one that Esther hadn’t counted on: love.

Final Thoughts:
Where are all of these mental illness YA books popping up from? Though I have to say, I’m quite enjoying the change, finding some of what these characters go through relatable, sometimes even when I don’t want to. With a main character, Esther, caught up in the belief that her family is cursed, rather than mentally ill, this one takes us on a different kind of adventure as she tries to hunt down and confront the embodiment of Death to have the curse lifted. Inserting the occasional chapter recalling Esther’s grandfather’s encounters with Death created a bit of back and forth over whether the paranormal aspect was real. I found this to be the main drawcard with the rest of the book taking a fair few sittings to get through.

It wasn’t bad; I closed the last page having enjoyed it. It was just a lot of time spent with characters I didn’t overly like. Esther lived her life believing that any and every fear was to be avoided, so pretty much anything that got her hackles up went on the list and that was that. For example, her twin brother, Eugene, had developed a fear of the dark, and so their entire home life had been adjusted to cater to him. All of their light switches were permanently duct-taped on, candles lit, torches at the ready. And the mother, she had developed a fear of bad luck, filling their house with rabbits for their lucky feet. It just went on and on like that. You get the idea.

Bringing up the romance quota was the ‘bad boy’ with a troubled home life, Jonah. He was probably my favourite character for the fact that without him, there’d be no story. He pulls Esther out of her comfort zone, forcing her to tackle her fears rather than living a life of avoidance. He does it with witty banter and a hint of a caring side despite the pushiness. I think it was probably just him trying to save an injured kitten that won me over, though. It wasn’t all that romantic a book, and I can hardly remember if there was even a kiss..probably, but it was more of a caring kind of relationship building throughout rather than a hot and steamy one.

With all that went into building up the Esther and Jonah dynamic, I thought a bit more of the time could have been spent exploring the few side characters that we had. Esther’s mute best friend, Hephzibah, got a chapter with explained very little other than that Esther had learned sign language to speak with her. When Hephzibah and Eugene suddenly started coming along on their adventures, not much mention was given to her, and Eugene only slightly more. It just felt like they could have been left out for all the impact they made.

Watching theire lives unravel, I felt better about my own mental health, but it left me wondering how many people actually live with these kinds of thoughts running through their heads every day of their life. It’s particularly confronting in its portrayal of self-harm, involving a scene of one of the characters on their hands and knees in their underwear, bleaching blood off of the bathroom floor. I could have done without that image, but it’s probably one of the more memorable ones from the book.

Recommendation:
Whether or not I’d recommend this book depends on your aversion to difficult characters. The book has its payoffs, but you need to sit through a lot of character flaws to get there.