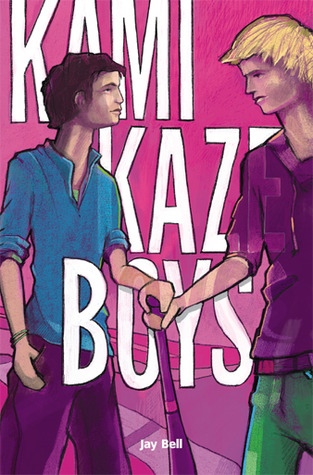 If the world is against you, don’t give up. Find yourself a kindred spirit. Then you can start fighting back.

They say Connor, the one with the crazy eyes and creepy scar, tried to kill his old man. Lately he’s been seen hanging out with David, the gay guy who always eats lunch alone. They make an odd pair, the loser and the psychopath, and bad things happen to people who mess with them. Not that Connor and David are looking for trouble. Even when taking on the world, they seem more interested in each other than fighting.

Kamikaze Boys is a story about breaking the chains that bind you and using them to beat down anyone that gets in your way. Better yet, it’s about holding hands with the guy you love while doing so.

Final Thoughts:
Connor and David were quite the pair. With the chapters alternating back and forth between these two guys, it gave us a chance to see what made both of them tick. Connor was such a sweety, always looking out for David, trying to keep the romance alive for him. There were struggles, but I liked that it had very little angst for the first half of the book, making it a real feel good story if you looked beyond the bullying attempts. The second half is where it all kind of came crashing down, and I felt like I was reading a completely different book. Some of the chapters became hard to sit through, playing on settings I don’t really find comfortable, but it just made me power through to the end quicker hoping for that happy ending.

I’m not sure if it’s meant to be realistic of teenagers, but I just couldn’t get on board with their actions towards the end. Things were going so well, and then every single decision seemed to scream out, ‘you’re making a mistake’. I wanted to slap sense into them or get their parents to. If the book could have ended in the middle, I would have walked away from it a lot happier than I did. I got through it, but damn, it was tough. The cute romance and occasional tame sex scenes in the beginning were enough for me. I was squeeing, riding on a high of giddy excitement with how nice this book was before all the shit hit the fan. Sure, the gritty direction things took felt authentic, but this just felt like it took it too far.