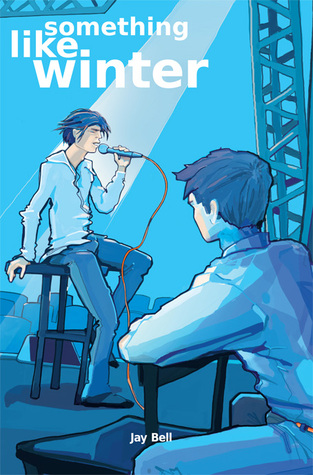 There are two sides to every story. When you’re Tim Wyman, sometimes there are three.

Tim hoped moving to Texas would mean a new beginning, a chance to spread his wings, but he soon finds himself falling into the same tired patterns. Until he meets recklessly brave Benjamin Bentley. Suddenly a whole new world opens up to Tim—love, sex, warmth… home. Certain that society won’t understand what he and Ben have together, Tim struggles to protect their relationship, even if it means twisting the truth. As his lies slowly push Ben away, Tim learns that the greatest enemy can come from within. Buried beneath a decade of deceptions, Tim must claw his way to the surface in the hopes of learning to fly.

Final Thoughts:
It’s hard to imagine finding Tim anything but unlikeable after Something Like Summer, especially in the wake of the amazing soul that was Jace, but surprisingly I found myself starting to warm towards Tim’s tortured persona in this companion novel. A lot more was going on inside his head, and around him, than Ben’s POV let on. There is some repetition as storylines intertwine, but this lessens once the high school years get left behind. Just like in the previous book, time jumps are used to progress the story, allowing us to feel like we’ve really experienced the lives of these guys, their struggles, loves and losses, rather than just a snippet with an open ended happy ending.

I’d like to think Tim’s a good guy, just someone in pursuit of the love of his life, but he made more than a few questionable choices along the way that made it hard to keep that mindset. Despite Jace being out of the picture for the majority of this book, I couldn’t help but remember his scenes with Ben from the previous one, making what Tim did to get in between them even more reprehensible. He had no qualms with tempting Ben into cheating as long as it got him what he wanted–and that’s what really frustrated me–the cheating.

I could rage about the abundane of infidelity, but there was more to this story than that. The platonic relationship between Tim and a shunned, but wealthy, older gay man, Eric, was actually quite refreshing to see. Tim’s adament refusal of money from him added to his character, allowing their companionship to grow. Knowing that Eric had died in the first book made their time spent together bittersweet in a wistful way. Watching Tim deal with the loss and try and find purpose afterwards heightened my appreciation of the story.

Being such a flawed character, but one who tries to fix himself, it makes it hard to hate on Tim too much. Plus, it made him seem real. And if I were to focus on the cheating, I could just as easilty throw Ben under the bus for some of the things he did to Jace. So if I can throw Tim a lifeline, Ben can have one too. Seeing them deal with so many heartaches, it tears at you, drawing you back to this story over and over again, hoping for that miracle ending. Unfortunately, not everything gets tied up so nicely. It’s one of those stories where you need to appreciate the journey rather than focusing on the destination.