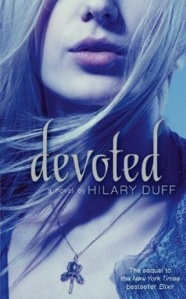 I know celebrity written books tend to get frowned upon, but Elixir was actually quite enjoyable. If you’ve been avoiding it like the plague because of the author, maybe try it from the library and see what you think. It plays heavily on reincarnation, soul mates and immortality. And after the way the first book ended, it was begging for a sequel. I’m glad that’s happening. I’m not too fond of the cover design change though. The first book really stood out with its faux-suede purple cover with the flower, which had relevance to the story. It seems they’re trying a new direction with the artwork, and I think it looks too generic now. Either way, I’ll still be buying.