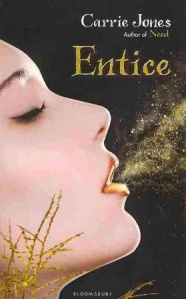 Zara and Nick are soul mates, meant to be together forever.
But that’s not quite how things have worked out.

For starters, well, Nick is dead.
Supposedly, he’s been taken to a mythic place for warriors known as Valhalla, so Zara and her friends might be able to get him back. But it’s taking time, and meanwhile a group of evil pixies is devastating Bedford, with more teens going missing every day. An all-out war seems imminent, and the good guys need all the warriors they can find. But how to get to Valhalla?

And even if Zara and her friends discover the way, there’s that other small problem: Zara’s been pixie kissed. When she finds Nick, will he even want to go with her? Especially since she hasn’t just turned…she’s Astley’s queen.

Final Thoughts:
Each book has been different so far, but this one brings the most change. If you haven’t started the series, go check out my review for Need. Without Nick, Astley steps up, taking on the male lead character to great effect. I really enjoyed this one; the plot had no lulls, and there was plenty of action.

This one picks up pretty much where Captivate left off, school dance and all. Nick is dead after his run in with an evil pixie king, his body taken by a Valkyrie to the after-world in Valhalla. He and Zara were so much in love, practically inseparable, that Zara did the unthinkable and allowed herself to be turned. As Astley’s pixie queen, she’s now able to cross over into Valhalla to retrieve Nick, a place where humans are forbidden. The problem is, finding Valhalla isn’t as easy to find as your nearest Starbucks, there’s no directory listing. Zara is determined to get Nick back though, doing anything, following every lead she can find.

Things aren’t standing still for her, however. The small town of Bedford is becoming the epicentre of pixie attacks. Heaps of people are going missing, drawing all sorts of outside attention to the town as the FBI step in. Media plays a part as each chapter is opened with a short, sometimes humorous, snippet from the news, blog posts and twitter feeds. As Zara and her band of not-quite-human friends hunt down clues to try and get Nick back, she has to deal with her feelings toward her new species, her new strength and also her growing feelings toward the king who turned her, Astley.

Unlike the previous two novels, this one had a distinct lack of romance due to Nick’s absence. I didn’t miss it though, as the plot was tight enough that you don’t get to stop and think about it. Sure Nick and Zara’s relationship was probably my main attraction in the beginning, but with Astley, his presence seems to counterbalance it. Spending a lot of time with Astley, I got to know him better this time around. He isn’t as impetuous as Nick, but he does share the same strong protectiveness trait towards Zara. I enjoyed learning of his struggles, feeling like it made him more of a person. Knowing that he has had to endure his own private pains, while still holding up his strong front for Zara made me like him even more.

The reckless-in-the-face-of-danger gene, that Zara was so fond of, has waned a bit in Entice, much to my appreciation. For the most part, she actually listened to people when it was in her best interest. She’s certainly grown over the course of the series, which is probably due in part to her new pixie-ness. I liked that she still occasionally named her phobias, yet doesn’t let them overcome her. Instead she’s able to face what would have previously scared her, with a desperate need to protect those important to her.

The fact that Astley keeps referring to Nick as ‘your wolf,’ made me smile. I know I’ve already talked about him, but Astley really does seem to be my favourite character now. Even though he and Zara aren’t a couple, their relationship is sweet and caring enough that I could see them maybe getting together in a future novel. The humorous banter helps keep the book light amidst the heaviness of the events going on around them. There was a lot more action than before, but it’s not overdone however. It worked well and actually improved my feeling towards the series. The emotion was there, the spirit was there. I thoroughly enjoyed my time spent on this one.

PS. I’ll be sending my thoughts to Thomas Steffan.

Recommended to:
If you’ve read Captivate, you need to read this. There’s less angst this time (which might be a plus) and the romance is depleted, but there’s still enough emotion to keep you interested.