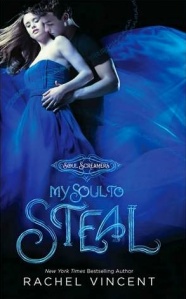 Trying to work things out with Nash—her maybe boyfriend—is hard enough for Kaylee Cavanaugh. She can’t just pretend nothing happened. But “complicated” doesn’t even begin to describe their relationship when his ex-girlfriend transfers to their school, determined to take Nash back.

See, Sabine isn’t just an ordinary girl. She’s a mara, the living personification of a nightmare. She can read people’s fears—and craft them into nightmares while her victims sleep. Feeding from human fear is how she survives.

And Sabine isn’t above scaring Kaylee and the entire school to death to get whatever—and whoever—she wants.

Final Thoughts:
There was so much angst in this book, like Crescendo level angst. I admit, it drove me insane for a while. Usually I hate angst in epic proportions, but once I got caught up in the ride, I started to enjoy myself. If you’ve read my earlier reviews for this series, you’d remember I mentioned how different each book is. This one sticks to that tradition of change, giving us a few new characters and lots of cattiness.

After what went down in My Soul To Keep, Kaylee and Nash are now in relationship limbo. I think it’s been coming for a while though. Things seemed to have been simmering between them, even before his betrayal. On the outs with Kaylee, and suffering from demonic drug withdrawals, Nash turns to Sabine, his first, in every way. She’s new in town and looking to pick up where she left off with him a few years ago. Kaylee’s only an obstacle, one she’s willing to do anything to get rid of. It’s a love triangle (not that Kaylee would admit it), but one where our main character isn’t the central point. Even with the competition, Kaylee isn’t ready to just rollover and take him back. But Nash, he isn’t one to sit around waiting on his lonesome.

That’s basically the general idea for the first hundred or so pages. It seems the supernatural heaviness of the previous two books has been replaced with some much needed relationship drama. That’s not to say, I wouldn’t prefer all of the characters happy, but then there’d be no book. I was able to put up with the angst in this instance because we’ve had such a full on journey so far, where characters barely got a chance to look at their lives without demons trying to steal their souls. Don’t worry though, there’s plenty of demonic action going on in this one too, you just have to get through Kaylee bitch-slapping Sabine first. I really like the way things just work together, integrating the old, already established plot with the new. While each book has some self-contained disaster, each feels like its building onto something bigger, expanding on the netherworld and its inhabitants.

So I’ve mentioned the angst once, twice or maybe five times so far. Sabine practically oozes conniving bitch, showing no remorse for her actions. In fact, it feels like she enjoys tormenting Kaylee. Yet Nash is so enamoured with her. It’s a little weird having Sabine effectively retconned into Nash’s life with such intensity after having no prior knowledge thus far. I think I could smack Nash for some of the things he gets up to. Even with innocent intentions, there are some things you just don’t do, especially if you’re trying to win your girlfriend back. I do understand his side of things, but he obviously lacks a grasp of the female mind. Take note Nash: hanging out with your ex in the middle of the night equals trouble.

I was a tad mixed on my feeling for Kaylee this time around. I liked that she was strong enough to stand her ground against Sabine and also somewhat with Nash, although for differing reasons. I don’t think I could’ve respected her if she’d just ran back to him at the first sign of competition, and disregarded all the bad things he’d been up to. I do love them together, it’s what made me fall in love with the first book, but I wouldn’t be heartbroken if they eventually end up apart. What annoyed me about Kaylee though, was her jealous whining. There were reasons for it, but still, it’s not something I like in a character.

I almost forgot Alec, who we were introduced to into the previous book. I love his culture shock after being trapped in the netherworld for some twenty six years. Having not aged since then, he has a 45yo mind with the body of a 19yo. Wicked combination, add to that, he’s living at Kaylee’s. I actually really enjoyed all of the scenes with Alec. He was like a best friend substitute whenever Emma wasn’t around. He’s easily become a favourite of mine after only a short time. Here’s a scene I loved between Kaylee, a bed-bound Alec, and her father:

Behind me, Alec shifted on the bed – as best he could, with three limbs bound to it – and I could practically taste his anxiety.
“What does Nash have to do with you tying Alec to your bed?” But honestly, he looked like he didn’t really want to know the answer to that.

Lastly, I have to mention my love for Tod again, but that’s no surprise. I’ve already gushed over him enough in my past two reviews. I’m picking up serious vibes from him now which I’m greatly enjoying. It’s still vague enough to pass under the radar though. They’ve been there for a while as far as I can tell, unless I’ve been imagining things. Anyway, I’ll leave you with this mental image: Tod as a pizza delivery boy.

Recommended to:
Those who’ve already started the series. The characters are fun, witty and emotional, plus there’s always plenty of action and mystery with creepy demons lurking around.